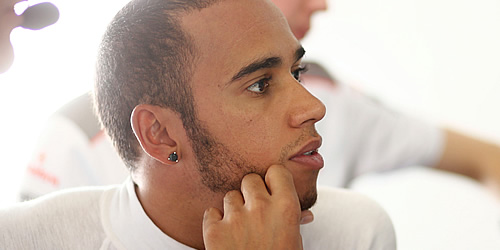 Lewis Hamilton admits he will ponder how to use Twitter in future after he was left red-faced for wrongly accusing his McLaren team-mate Jenson Button of ‘unfollowing’ him.

The 27-year-old, who has signed a three-year deal to drive for Mercedes next year, hit out at Button over “disrespect” before backtracking once he realised that his team-mate had never followed him in the first place.

“Obviously it was not the best of experiences [nor] the best thing to do. I put my hands up and apologised to Jenson,” Hamilton said ahead of this weekend’s Korean Grand Prix.

“Maybe Twitter is not the one for me, but I’ll try and improve from it.

“In my life, I think I’m going to make lots of mistakes and that was one of them but you learn from them.

“I try to stay away from all the stories. Sure there’s been a lot of heat this week. That’s the price you pay for being in this sport. It was an experience which I’ll hopefully learn from.

“Maybe Twitter and me don’t go too well at the moment. I need to step back and think about how I try and improve that.”

Hamilton Tweeted on Monday: “Just noticed @jensonbutton unfollowed, that’s a shame…I thought we respected one another but clearly he doesn’t.”

And after he realised Button had never followed him on Twitter, he posted: “My bad [mistake] just found out Jenson never followed me. Don’t blame him!”

Hamilton is currently 42 points adrift of championship leader Fernando Alonso in the drivers’ standings with five races left this season.

Fernando Alonso: Title race will go right down to the wire