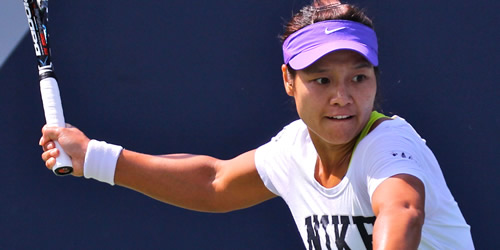 The China Open, played out in Beijing in one of the finest tennis venues in the world, has lived up to its considerable promise.

This is the climax, the fourth and final Premier Mandatory, of the women’s tour and, appropriately enough, it has produced some high quality, drama-packed matches from players determined to claim a place at the WTA Championships in two weeks’ time.

There was the surging power of Julia Goerges, playing with greater intensity than in many a month. First she beat Vania King in three hours and three sets, then Sam Stosur in another two-and-a-half hours, before falling to another big-time hitter Marion Bartoli.

Caroline Wozniacki, who needed to go deep to stand a chance of staying in contention for Istanbul, played her heart out after strong runs to the Seoul title and Tokyo quarters.

The effort began to take its toll, especially after two three-setters totalling five-and-a-half hours that showed all the resilience for which the Dane is renowned.

It still took three sets and almost two hours for Angelique Kerber to beat her, and the German then retired after losing nine straight games to Maria Sharapova.

The Russian, for her part, dropped only six games in her last three matches to reach the semis, while at the other end of the draw, Victoria Azarenka looked even more impregnable: 15 dropped games in the four matches that took her to the semis.

But two of the most entertaining matches came from the other two quarters. The first featured defending champion Agnieszka Radwanska against Na Li. Both fought like tigresses from a set down in the third round and both started hot and high-paced in front of a near capacity crowd.

The early stages were encapsulated in the battle at deuce in the fifth game, with Radwanska drawn to the net and firing off volleys to combat a string of attempted passing shots from Li. Radwanska held, but it was a temporary reprieve.

In the seventh game, Li lifted her play to near perfection and broke for a 4-3 lead, only to lose focus and face three break-back points. But an ace, a sequence of flat, deep forehands, and she saved them all to hold.

Li’s wonderfully balanced movement and crisp shot-making threatened to break Radwanska again but the Polish woman’s craft and variety held off another break point. Li had to serve it out, and she did so in style, attacking on set point to fire a winning swing volley. Beijing’s Diamond Court erupted: Here was their most famous daughter in peak form against the WTA’s ‘fan’s favourite’, the ever-popular Radwanska.

It looked, in the opening game of the second set, as though Li would ride her momentum to a swift victory when she took a 40-0 lead on Radwanska’s serve but a sudden spate of errors kept the Pole in the game.

However, Li turned on the pressure again in the fifth, making some glittering returns of serve to force a break. She served well—indeed dropped only five points on her first serve in the match—and backed it up from both baseline wings.

Li plays with a poise and a crispness equal to any woman in the game, and it’s attacking tennis that can bring errors but also winners. With a 4-2 lead, she had notched up 29 winners to 9 from Radwanska. She broke again in a throbbing baseline exchange that even the defence and creative hands of the Pole could not contain and Li served out the match, 6-2.

The match may have comprised just 18 games, but Li made 32 winners—and just three of them from aces. It was a performance that deserved a reward and, shortly afterwards, she had her place in Istanbul confirmed.

Li’s success leaves Wozniacki, Stosur and Bartoli battling for the crumbs, the ‘alternate’ ninth woman should a qualifier become injured. Last year, though, Bartoli played from just such a situation, and she is the one still alive in Beijing.

Not a naturally easy mover like Li nor blessed with the touch of Radwanska, the super-smart French woman has made, and continues to make, the best of her considerable tennis gifts: Power on serve and on both wings from the baseline, tactical intelligence and the kind of application and work ethic that is worth several games every match.

She played the contrasting Carla Suarez Navarro, a petite Spanish woman with a glorious single-handed backhand that is also worth several games a match. She has both Li’s balance and Radwanska’s touch, but looked completely at sea against the bouncing, aggressive game of Bartoli in losing a fast 6-0 set.

But then all the Spaniard’s elements came together in a purple passage of play that had any tennis fan scratching their head in wonderment: How could such talent reside in a No46-ranked woman? Even Bartoli shook her head in bewilderment as she saw the second set flash by, 6-2.

The third set had it all: broken serves, comebacks, power and retrieval, shot-making and defensive resilience. And in the end, it came down to force of will. Bartoli would simply not consider defeat.

She now faces the daunting prospect of Azarenka, a match she must win, and then the final too, if she is to move to No9 in the race. It’s a tall order, and she and Stosur could find themselves playing for that reserve spot in the last tournament of the tour in Moscow.

Six players who have won an International tournament and are not competing in Istanbul, plus two wild cards