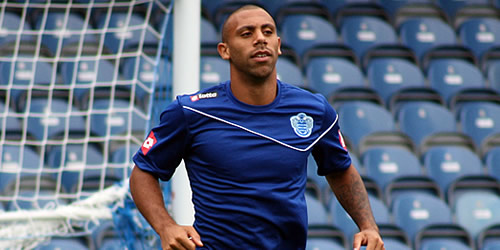 Anton Ferdinand will wear the anti-racism Kick It Out t-shirt before Queens Park Rangers face Everton at Loftus Road on Saturday, according to his manager Mark Hughes.

The 27-year-old was reported to be considering boycotting the campaign after a perceived lack of progress in the fight against racism in English football following the John Terry saga.

The Chelsea captain this week opted against appealing a four-game ban handed out by the FA after they found the defender guilty of using racist language towards Ferdinand in a Premier League match last October.

But QPR manager Hughes is expecting Ferdinand to don the t-shirt this weekend, although the Welshman admitted he had not spoken to his centre-half about the subject since their goalless draw with Chelsea.

“Earlier in the week [I spoke about to Anton about it], whether or not his stance has changed, there’s no reason to think it has changed,” said Hughes.

“Anton’s been told about the t-shirt and I haven’t heard anything different.

“I haven’t spoken to him in terms of the Kick It Out campaign. Really, we haven’t had an in depth discussion about the situation for a number of weeks.”

Sunderland’s Danny Rose claimed he was subjected to racist abuse in England Under-21’s 1-0 victory over Serbia on Tuesday night, once again throwing the issue into the spotlight.

Despite the high-profile cases involving Suárez and Terry, Hughes believes English football has made “huge strides” over the past two decades thanks to campaigns such as Kick It Out, while other countries have struggled to address racism.

“Obviously people will have a view on campaigns against racism in football and in life, some will feel strongly that not enough is being done,” he added.

“But if you look in the last 10, 20 years, there’s been a huge amount of work done in terms of making sure racism doesn’t have a part or a presence in football.

“I think we’re ahead of society in that respect, in terms of what we’re trying to do about it.”

He added: “We saw events in Serbia, and that’s probably where we were 20 years ago, but we’ve made huge strides. Unfortunately, not every country has made the strides that we have done. That’s down to campaigns like Kick It Out.”

QPR manager Hughes on Redknapp reports: I’m not fighting for my job