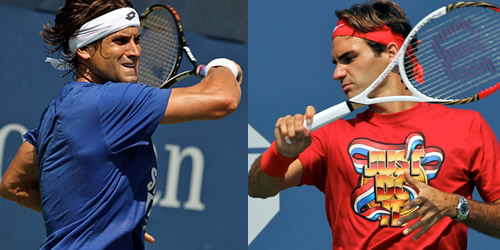 David Ferrer and Roger Federer are in action in Valencia and Basel this week Photo: Marianne Bevis

The Grand Slams have been and gone, the Asian swing has been short and sweet, and the tennis tour has headed to Europe for the last push towards London’s World Tour Finals, the Davis Cup climax and the kudos of sealing the end-of-year No1 ranking.

But this week, in the last pair of ATP 500s of 2012, two favourites of the tour vie for attention in their very contrasting home cities in two very different countries: Roger Federer headlines in Basel Switzerland while David Ferrer takes the spotlight in Valencia Spain.

Federer and Ferrer seem to epitomise their own tournaments, too: the Swiss calm, cool and with a brand of tennis as finely-tuned as the Swiss Rolex he wears; the Spaniard a bustling, hot bundle of effort with a game to match.

And the Swiss and Spanish themes filter down into fields filled with compatriots—though the four Swiss in Basel cannot match the depth and breadth of Spanish interest in Valencia, where no fewer than nine home players are in action. What’s more, even without their top player Rafael Nadal currently in competition, seven of those nine Spaniards are in the top 50.

While headliners Federer and Ferrer are already assured of their places at the World Tour Finals, the second seeds in both are fighting to confirm their places: the No7 Juan Martin del Potro in Basel and No8 Jo-Wilfried Tsonga in Valencia.

However, with the withdrawal of Andy Murray from the Basel draw, the Spanish tournament seems set to offer the toughest challenge to the hopes of its top seeds.

Ferrer and Juan Carlos Ferrero, who will retire from professional tennis at the event, are two of five former Valencia champions in the field and all eight seeds are ranked in the top 15. Of those, No9 Janko Tipsaevic, No10 Nicolas Almagro and No12 Juan Monaco have all nursed hopes of qualifying for London though the chances of the latter two seem to be fading like the autumn sun.

Basel, even without Murray, will still take some beating when it comes to player power. Federer on his own makes this a huge attraction, and the entire tournament, the biggest sporting event in Switzerland, has been sold out for some time. The Swiss No1, appearing here for the 13th time, famously began his tennis career as a ball-boy at this very event. As defending champion, he is going for his sixth title—and he has appeared in three other finals as well.

Not a surprise, then, that is no room for any other Basel champions in the draw, but there are two champions from this weekend, del Potro from Vienna and Andreas Seppi from Moscow—along with the man he beat in the Kremlin Cup final, Tomaz Bellucci. Both are drawn in Federer’s quarter.

Bellucci will fight it out with one of the nominees for the ATP Most Improved Player of the Year Award, Go Soeda, for the chance to face Federer in the second round—assuming the Swiss beats qualifier Benjamin Becker. Another in the same category, Marinko Matosevic, plays in the bottom half.

Meanwhile, a nominee in the Newcomer of the Year category is Andrey Kuznetsov, who at 21 has risen to No72 from 222 at the start of the year. His baptism of fire was to open the tournament against popular Frenchman Julien Benneteau.

That match is the overture to what the Swiss Indoors calls Super Monday, and with some cause. The opening ceremony, and the prelude to Federer’s first match, is scheduled to be an Olympic extravaganza boasting more than 21 Olympic champions to mark 100 years of Swiss Olympic success.

With the unenviable role of closing the night’s proceedings is world No13 Richard Gasquet against Dutchman Robin Haase. But with Basel sitting astride the Rhine at the junction of Switzerland with France and Germany, this too is a crowd pleaser.

So let the competition begin—between the players without question, but also between these two very contrasting and compelling tournaments.