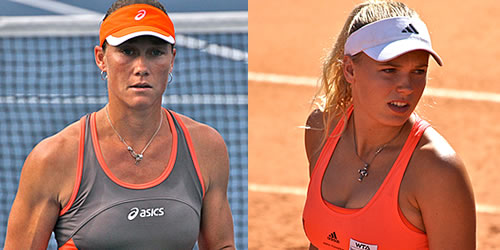 With fewer than five days to go until the WTA Championships bring the women’s tennis year to a dramatic climax, the final line-up was only settled in the remaining two events of the 2012 main tour.

Sam Stosur and Marion Bartoli were drawn to face off in the final of the richer of the two events this week, the Premier Kremlin Cup, to decide the first and second alternate places in Istanbul. And as Bartoli knows from experience—she took over from Maria Sharapova during the Championships last year—the first reserve is the first in line to take part should one of the elite eight pull out.

But the race was decided early: In losing her first match to Sofia Arvidsson in an uncharacteristically subdued performance, Bartoli conceded the No9 spot to her rival. She remained upbeat, despite the disappointment: “No matter what happens, being in Istanbul will be great. It’s a reward. You feel like you belong to something special.”

Meanwhile, there is still plenty to play for both in Moscow and at the International in Luxembourg, as the race to the Tournament of Champions at the end of October is still on.

The two wild cards for the event have already been announced: the No16 ranked Maria Kirilenko, finalist in Pattaya City and New Haven, and world No45 and Bulgarian Tsvetana Pironkova. The tournament is being held in the Bulgarian capital, Sofia, for the first time.

The criteria for remaining six places in the $750,000 round-robin event are the highest ranked players to own at least one International tournament in 2012 but who are not among the eight elite in Istanbul.

For Arvidsson, therefore, her win over Bartoli may prove valuable, especially if she continues deep into the draw. The Swede won in Memphis in February and stands just outside the current list of contenders. She has picked up 120 points in Moscow already and, should she win the title, she would earn enough to take her right into ranking contention. It’s a high-quality tournament though, with the likes of Kirilenko, Stosur, Ana Ivanovic and current race leader Caroline Wozniacki still in the draw.

The next International title-holder below Arvidsson is Heather Watson, but as she is not playing this week, she will not advance beyond her career-high No47 ranking until the 2013 season gets under way.

Other owners of International titles in 2012, in ranking order: