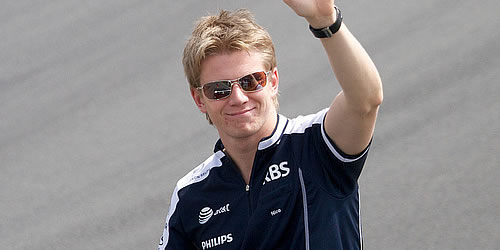 Nico Hulkenberg is currently 11th in the drivers' standings Photo: PH-stop, via Flickr

Sauber have named Force India’s Nico Hulkenberg as one of their two drivers for the 2013 Formula 1 season.

The 25-year-old German will replace Sergio Perez, who is to join McLaren from next season, with Sauber still to confirm their second driver for 2013.

“I’m really looking forward to working with Sauber,” said Hulkenberg, who is currently 11th in the drivers’ standings.

“It’s a well-placed team and very competitive. Plus it’s a team in which young drivers have repeatedly delivered exceptional performances. I would like to take up that baton.

“Sauber are currently going through a very positive development and I’m certain that together we can achieve a lot.

Hulkenberg’s best race result this season was at the Belgian Grand Prix, where he finished fourth on the challenging Spa-Francorchamps circuit.

“We’ve been observing Nico for some time now and his performances have been very persuasive,” said Sauber team principal Monisha Kaltenbor. “I’m sure he will fit in very well with Sauber.”