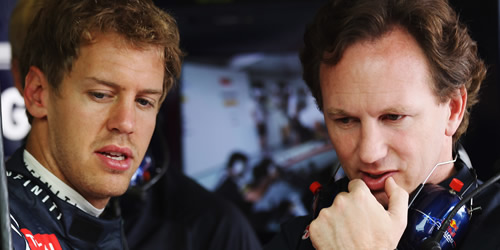 Christian Horner believes Sebastian Vettel is now Fernando Alonso’s only real rival in the race for the Formula 1 drivers’ championship.

And despite Kimi Raikkonen and Lewis Hamilton being 37 and 42 points behind the leader, Red Bull team principal Horner believes it is now a two-man race ahead of Sunday’s Korean Grand Prix.

“We need to keep trying to get performance out of the car, and the championship now is effectively a battle of five races between Fernando and Sebastian,” said Horner.

“You can’t rule out the others but whoever does the best job over the next five races will ultimately prevail. I think that Fernando is a very shrewd and formidable opponent.

“Sebastian has had two DNFs because of reliability, Fernando has been unlucky with [Romain] Grosjean at Spa and with his puncture here.

“Luck tends to balance itself out over a 20-race season and it will be down to what the two of them do on track now and the relative performances of the cars over the remaining five races.”