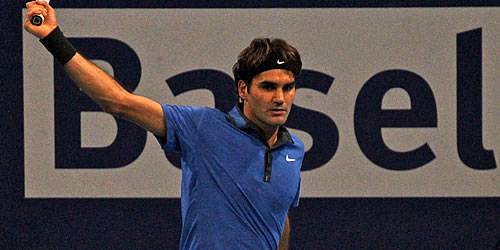 The evening session of Basel’s quarter-final day promised both the home-town boy and defending champion, Roger Federer, and the man too often burdened with the tag of ‘baby Federer’, the taller, slenderer, 10-years-younger-than-Federer Grigor Dimitrov—but the feast was late in coming.

Juan Martin del Potro, despite a one-set deficit and a confirmed place in the World Tour Finals, was not going to give in to Kevin Anderson without a 2hr22min fight, finally beating the 6ft 8in South African and his 20 aces, 3-6, 7-6, 6-2.

But an hour after their allotted time, the handsome 21-year-old Dimitrov, who modelled his tennis on his idol Federer as a youngster, stepped onto court with Frenchman Paul-Henri Mathieu.

It was difficult to predict which man the Basel crowd would favour. This cosmopolitan city at the junction of Switzerland with France and Germany has given the French men great support—and Mathieu also lives in Geneva. But Dimitrov resides in Paris and has the kind of assured personality and charismatic game that has already attracted a big following. That he emulates Federer in his one-handed backhand, a similar service action and some outrageous shot-making only adds to the package.

In the event, it became obvious rather quickly. Mathieu was their man, perhaps helped by his back-story as well as his attractive all-court tennis.

The Frenchman, a former No12, missed all of 2011 following knee surgery but now 30, he broke back into the top 100 in September from a low of 733 in February. What’s more, as if his quality three-set victory over Nikolay Davydenko had not proved it, he was very comfortable on fast indoor courts. Indeed of his eight career finals, four had come indoors.

Dimitrov, though, had begun to find consistency alongside talent in 2012 to reach his first three ATP semi-finals. It had the makings of a compelling contest.

Certainly the opening games suggested that Dimitrov had gained huge confidence from wins over Viktor Troicki and Julien Benneteau. He glided to a 5-2 lead, playing the Frenchman at his own attacking game. But Mathieu invaded the front court still more to wrench back the set. Then fending off break points on his own serve, he took it to a tiebreak.

Dimitrov seemed unable to handle the pressure and the errors came, including a final double fault that handed the set to Mathieu, 7-3.

The second set mirrored the first, with the mature tennis and lively movement of Mathieu drawing errors and an early break to lead 4-2. Dimitrov tried to take the attack to his opponent but played several wild volleys to go down 5-2.

Then came the repeat reversal: This time Dimitrov made the comeback, discovered his extraordinary backhand—a near double-jointed sweep of the arms—and levelled to take it to another tiebreak.

This one was much tighter than the first but Mathieu pounded his forehand wide and high to the Dimitrov backhand—in a tactic reminiscent of those used against the Federer backhand wing—until the error came. A French forehand winner finished the tiebreak, 7-4 to take a hugely popular victory.

Mathieu’s semi-final opponent would be either fellow Frenchman Benoit Paire, the latest addition to the swathe of top-50 players from that country—there are currently six—or it would be the real-deal Federer.

The tall, extrovert 23-year-old Benoit was at a career-high ranking of 46 from a place outside the top 100 a year ago, and had already proved to be a crowd pleaser in Basel. He engaged the fans with his personality and his unconventional tennis. He had never played Federer before and couldn’t wait:
“I’ve always admired Roger. It is a dream to be able to play him in his home. Of course he will be the favourite, but I want to put in my best effort and play as well as I can.”

Yes, Federer was favourite—both the man and his odds. He had, after all, won 31 of his last 32 matches here—and he had sent Severin Luthi, his friend and part-time coach, to scout this rising star. The feedback clearly worked.

The first few games were intriguing and showed the variety and touch that Paire possesses. He opened serve, and straight away made a couple of aces and a serve-and-volley play to leave Federer rooted. But if there was any concern about Federer’s reading of Paire, it was soon dismissed.

The third game saw Paire use the drop shot no fewer than three times, once to great effect with a follow-up lob and another dropshot to finish. But the point also showed that Federer, at 31, is still quicker than many other men on the tour: He picked up the first dropshot and retrieved the lob but could not regain his ground for the second drop.

Paire tried the drop again, but this time Federer both reached it and made a winning return to earn a stunning break. And with the advantage of hindsight, the die was cast then and there.

Federer deployed his varied serve to great effect—he won 11 from 11 first serves in the set and dropped only one point on first serve in the match—and began to throw in a few serve-and-volley plays, his off-forehand put-away and some confident smashes.

There was, in fairness, a clutch of fine shots from the Frenchman—one of them earning a rare clap of approval from the defending champion. But a second break, helped by two French double faults, finished the set, 6-2.

The first set had taken half an hour. The second would take just 24 minutes as Federer grew in confidence, tried a cheeky backward volley, and forced a growing number of errors from the Paire serve. The Frenchman chopped and changed his racket but that was not the problem. Here was Federer in full-flight, almost toying with his opponent, it seemed, and the perky Paire head dropped.

The matched ended as it had started—almost. This time Federer played the drop shot and followed it with lob. The Frenchman reached both but could do nothing but fire the ball wide. The set went to the Swiss, as the first had done, with two breaks of serve to Federer and not a single break point to the Frenchman.

It had been a lesson from master to pupil, and had taken Federer to his 10th Basel semi-final, where he will meet the less star-struck Mathieu. This Frenchman will not let Federer manipulate things with such freedom, but he will need to reproduce his best form if he is to stop the Basel boy from a shot at his sixth title.

WTA Championships 2012: It’s a dream to clinch No1 spot – Azarenka