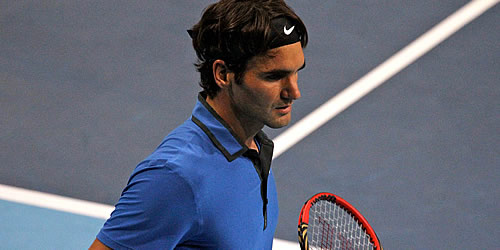 The semi-finals in Basel held rather fewer surprises than their opposite number in Valencia. The three top seeds were all present and correct: Roger Federer, Juan Martin del Potro and Richard Gasquet, joined by French wild card and former world No12, Paul-Henri Mathieu.

But events in Valencia had shed a new light on Basel events. Jo-Wilfried Tsonga, Janko Tipsarevic and Juan Monaco, all contenders for the World Tour Finals in London, fell in the first round and Nicolas Almagro lost to top seed David Ferrer in the quarters.

All of which meant that Gasquet found himself above Almagro at No10 in the race and with the chance to go to No9 if he won the Basel title. And with the withdrawal of Rafael Nadal from that race, No9 became the new cut-off, and Gasquet a surprise addition to the list.

There were also records on the line for the king-pins in each tournament, the home favourites and top seeds Ferrer and Federer. The Spaniard looked on course to take his third home title and equal the tour-leading six titles for the year owned by Federer.

The Swiss, though, was going for his sixth Basel title and his seventh title of the year, taking into his semi-final 32 from 33 wins at the tournament of his home. But he had still more to occupy his mind than that.

To keep alive his hopes of retaining the year-end No1, he needed to win this title. Of less immediate import, but still noteworthy, Federer could draw level with two John McEnroe records. By reaching the Basel final he would equal the American’s 875 match wins and by winning the title he would equal McEnroe’s 77 career titles.

So what were his chances? The stats were squarely in his favour. Only once in his nine Basel semi-finals had Federer lost, and that was back in 2002. And in 2012, he led the tournament in service games won—35 out of 36—and was second in both first serve points and second serves points won. Add in that he had not lost any of his five previous matches against his long-standing colleague Mathieu and things looked tough for the Frenchman.

The battle between the London qualifier and the aspiring London qualifier was an intriguing contest of contrasts. The big Argentine had dug deep to pull out his wins, especially against Kevin Anderson in the quarters, and medical time-outs suggested he was a little match weary from his win in Vienna last week.

Gasquet, however, despite a long stretch in the Far East—including the title in Bangkok—had looked spritely and aggressive. He clearly relished the chance to play attacking tennis:

“It’s a fast court so I needed to go to the net, and especially to serve and return well.” 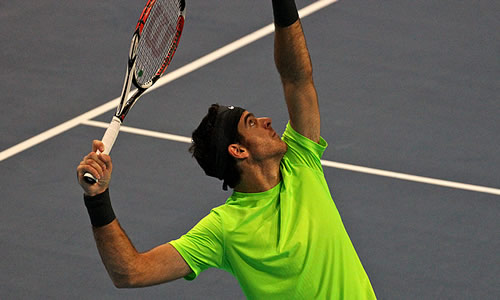 Indeed his aggressive, attacking tennis recalled the play that had taken him, five years ago, to world No7 and his only end-of-year participation at the season’s climax. The question remained, could this form and these tactics overturn his last four straight losses to del Potro?

The answer was pretty swift. Del Potro’s firepower pinned Gasquet behind the baseline despite his early attempts to repeat his net-attacking play. The Frenchman held to love in the first game but by the fifth game, he was having more trouble moving forward as Del Potro pounded wide to the Frenchman’s single handed backhand. The Argentine’s huge off forehand was particularly potent and he broke to love for a 3-2 lead.

His movement for such a big man is surprising, shifting easily along the baseline, picking up low sliced balls on the backhand and making the occasional smash with ease. He took the set 6-2 and, despite a flurry of attacking plays early in the second set—both men broke the other but del Potro broke a second time—Gasquet found it increasingly difficult to penetrate the Argentine’s game.

Del Potro broke again in the seventh for a 5-2 lead and served the match out with three aces in little more than an hour, 6-2.

Federer’s contest against Mathieu proved to be a longer and tighter contest as the Frenchman held his form for most of the hour and half it took to decide.

Federer was playing catch-up through both sets as the Frenchman opened serve, but he never looked in any real danger of falling behind—indeed he did not face a break point through the whole match. But in return, Mathieu did not offer up many of his own either—just two in the first set.

The first came in the seventh game and the Swiss shanked a backhand, but the second, at 5-5, did not go begging. A fine long rally of teasing shots to each corner, varied pace and spin, eventually brought an error from Mathieu, leaving Federer to serve out the set—and he did it with panache, attacking with drop-shot, volley and smash: 7-5.

Mathieu seemed to run out of ideas in the second, though he continued to resist the pressure to the point of only offering up two break chances. He saved the first in the third game with some good serving but could not do the same in the fifth.

The closest Federer came to losing a game was a deuce in the next game but he snuffed that chance out with an ace and then a chasing forehand winner. There was no way back for Mathieu and it was all done at 6-4.

So Basel has got the dream final between the top two seeds in what will be their seventh meeting of the year. Federer has won all six so far, as well as the match before that in 2011. But the memory of his previous two losses in 2009, the five-set final at the US Open and a three-setter at the World Tour Finals, are the reminder of what a full-strength del Potro brings to the rivalry. And if that was not enough to set the pulse racing, their last two matches were as close as could be: Federer won the French Open quarters after losing the first two sets and came through their semi-final Olympic match 19-17 in the final set.

Federer was very mindful of the challenge:

“I think he looked very impressive today I must say against Gasquet, and obviously I know what Juan Martin can do, especially in the offensive level, so he has a big role to play in how the match is going to unfold.

“I had a really hard time at the Olympic Games to break his serve. Obviously this is not grass but still indoors is pretty quick and you can serve your way out of trouble very often. That’s what he did exactly at the Olympics. So I’m excited to see how he’s going to come out and play.

“From myself, I’ve obviously got to take it to him, and also play offensive myself and make sure I use good variation, and use my athletic abilities to keep him moving as well.”

It’s a match to relish. For now, Federer has drawn fourth in the list of most match wins in the Open era and tomorrow, he could do the same in titles if he wins. But such things will not be on his mind right now.

WTA Championships 2012: It’s a dream to clinch No1 spot – Azarenka