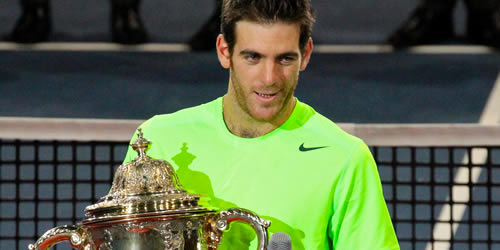 For the seventh time in 2012, Roger Federer and Juan Martin del Potro faced one another across a tennis court, the latest contest in what has grown into one of the most intense rivalries on tour. For while the Swiss held a 10-to-two lead in their previous matches, that told little of the story.

At the start, at Wimbledon in 2007, the tall, slender Argentine, who has always looked older than his years, was just 18. That same year, the two had their first and, until today, their last meeting at Basel. Back then, Federer was the top-dog in tennis and had been world No1 for just a few months short of four years. It felt like man against boy.

Then came 2009: Federer had been supplanted as No1 and del Potro already had four titles, had broken into the top 10 and, by the time they met in the semi-finals of the French Open, he was in the top five. Here was where the rivalry really began, as del Potro—stung perhaps by his 6-3, 6-0, 6-0 thrashing at the Australian Open earlier that year—took a two sets to one lead before losing in five.

The Argentine, now more developed, more powerful and with growing confidence, had become the formidable opponent he had promised to be, and announced his place among the ‘big boys’ at the US Open. This time he was two sets to one down, snatched the fourth in a tie-break and took his first Grand Slam in five. And he went on to beat Federer at the World Tour finals as well.

Federer subsequently said that he had expected del Potro to reach No1 within the year—he repeated as much in an ATP interview ahead of the final. But having risen to No4 at the start of 2010, del Potro played just two matches after the Australian Open when injury forced him into wrist surgery and he spent 2011 climbing back up the rankings.

He had played Federer only once since his WTFs victory until this year, but that intensity quickly returned to their match-ups. Dubai went to two tie-breaks and Roland Garros saw a near-replay of their 2009 meeting—though this time, Federer went two sets down before coming back to win.

The scene was set for a replay of 2009, this time at the Olympics in London rather than the US Open. Del Potro won the opener, Federer pulled back in a second set tie-breaker and they played out one of the sets of the year in the third, a 19-17 match-winner for Federer. It had taken a record four and a half hours.

Now Federer was going for his 34th win from his last 35 matches in Basel, was appearing in his 109th final, and going for a 77th title to equal John McEnroe at third on the all-time title list.

So the scene was set for another classic, one enhanced still further by the warmth the two men have for one another. Del Potro talked of their friendship:

“It’s always a pleasure to face him…Roger is really one of my best friends in the circuit.”

Federer also welcomed the chance to play the Argentine again:

“I’m excited to be playing Juan Martin in the finals. He had a tough last couple of weeks and it’s good to see him back up his Vienna win…We can look back at some great matches and hopefully we can live up to another good one.”

Del Potro’s form indoors—a 16-1 record in 2012—and his highest ranking in more than two years, No8, showed he was ready to reverse the result of their first meeting here five years ago, and that form was on full show as the match got under way.

The Argentine laid down his marker with a love service hold, and in the fifth game his baseline game cranked up both on the forehand and backhand side to force errors from the Federer serve. A hush dropped onto the crowd as the Argentine converted the first of two break points to take the lead, and despite Federer running him all over the court, del Potro showed great speed and mobility to stay in control.

The Federer serve began to find its rhythm as the match went on but a couple of aces to hold at 4-5 was not enough: del Potro continued to make a great percentage of points from his first serve and took the set, 6-4.

Federer needed to change something, and he went on the offensive in the second, racing to the net on del Potro’s serve. The best rally of the match so far, both defending the net, went to Federer and a double fault from the Argentine earned the Swiss a break point. Again, the power of the del Potro serve, followed by a volley put away, saved the day.

The only other break point of the set came in the 11th game, and gave match point to del Potro. Federer found a forehand winner and sealed the hold with a serve-and-volley winner. He roared, the arena erupted, and del Potro held serve to love: It would go to a tiebreak.

It was Federer who took first blood, making winners off the volley and forehand to go 4-1, but del Potro came off the better in a sliced backhand exchange—a distinct contrast to their last indoor final in Rotterdam. He passed Federer with the forehand, served up an ace and closed to 6-5, but Federer would not be denied in front of his clapping, stomping crowd. He served out to draw the match level.

Now the Swiss confidence was palpable: Time to press home his advantage. In the third game, he had three chances to break serve, despite a missile of a serve catching him in the thigh, but the del Potro defence kept him in the game and after four deuces, he found the ace to old.

Federer, despite serving second, was holding more easily and did not face a break point in the set, and he stepped into the court again in the seventh game for another break point chance. But he could not convert and he would not get another chance.

Federer came under threat at 5-6, 0-30 and fired three aces out of his 18 in the match to take it to another tie-break: This would not be decided by the first to break as it had been in the Olympics. It would come down to the fewest errors and fewest dropped points.

Unfortunately for the home supporters, it was Federer who netted a sliced backhand in a long cross court exchange, he who netted a straightforward forehand and finally put a backhand long, and those three points gave del Potro the 6-3 advantage to take the set and victory.

Before the red carpet was even out, Federer was having to find words for an on-court interview and he confirmed what most probably believed. Del Potro deserved the win: “I’m happy for Juan-Martin: You played great tennis.”

The Argentine, who has a knack often of looking surprised by his success, simply thanked Basel and Federer for their kindness. He added: “There’s a lot of respect from you to me here. It’s always a dream to play Roger. We know he is the best ever in this sport and I’m proud to be here.”

There are few men who could win over a Swiss crowd having just beaten their most famous son, but del Potro is probably one of them—just. He may be less popular in Paris, where Federer has now decided to withdraw.

But with back-to-back indoor titles, and halting a two-year indoor Federer run, the gracious Argentine has surely put himself into the frame for a good run in Paris and, more particularly, at the World Tour Finals.

WTA Championships 2012: It’s the best season of my career – Williams