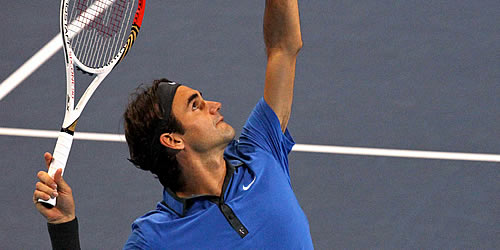 When you’ve been coming to a place every year since you were 18—as Roger Federer has done to the Swiss Indoors tournament—it must feel like sinking into a warm blanket, especially when you were born just a few miles down the road.

Life since then has changed beyond all recognition for the Basel native.

Now he splits his time between Switzerland and Dubai when he is not trotting the globe.

Back then he had just met his partner, Mirka, at the Sydney Olympics: Now they are married with twin daughters to add a new dimension to their travels.

Back at his first Basel tournament, he reached his first ATP final, and did the same the following year, too. Now he has five home titles amongst a total of 76 and is back to try and win a sixth.

Perhaps it was no surprise that, after a small joke at the expense of an absent Andy Murray—“Don’t Murray, be happy”—the evening’s MC concluded his introduction to Federer with “Welcome home, Roger Federer.”

Some things have probably changed little in all those years. The fan support is unquestioning in this city, but now the No1 in the world draws those fans from across the world. A quick run-down from one of the Swiss fan originals listed countries just across the Rhine, more from those bordering the English Channel and then—a measure of the reach Federer now has since those first steps to the top—individuals from the USA, India, Singapore and the Philippines.

This year is more testing than most, as Federer also has a remarkable run in 2011 to live up to. Basel marked the start of a run of titles beginning in Switzerland, went on to his first Paris Masters and concluded with defence of his World Tour Finals crown.

Not content with that, he extended his unbroken indoor run in Rotterdam and is hoping to continue that run this week—and claim his seventh title of the year.

But what were his chances or such a repeat when the one-week break between Paris and London has now been removed: Is it possible to do the triple again?

“I think it’s possible, but then again it’s tough,” he explains to me. “It all depends on how tough and how much you play, how the scheduling is, who are the opponents, and then maybe get a chance to get on a run.

“But that shouldn’t be my goal right now, to win all three again. The goal is first to see how I play here, whether I go to Paris or not, and take it from there. Of course I want to play well at the WTFs, there’s no question about that. It’s the highlight of the end of the season and, in my opinion, one of the biggest events we have in the sport…There’s still a lot on the line, and right now I have to think day by day. It’s simple, it’s pretty routine, but it’s my only way to handle these next couple of crazy weeks.”

That dream run did not look entirely secure early on in his opener. He faced fellow 31-year-old, German Benjamin Becker who, on paper at least, was a more straightforward proposition than his scheduled opponent. Jeremy Chardy was the highest non-seeded player in Basel and is a contender for the Most Improved Player Award after climbing from 103 to 31 this season, but the Frenchman had to withdraw with injury.

It began well enough, with Federer winning the first point of the match to cheers that suggested he had already won the match.

And he looked well on the way to doing so as the German took the next 10 minutes to hold serve. But from there on, neither man seemed able to find their rhythm and Federer faced a break point in the eighth game. He survived but the match edged towards what looked like an inevitable tie-break before Federer—one banana consumed at the change of ends—brought up a couple of break points and Becker double faulted. The break and the set went, 7-5, to the Swiss.

It had taken an hour, and it briefly looked destined to extend to three sets as well, when Becker broke the Federer serve to 15 for a 3-2 lead in the second set.

That was enough for the Swiss clockwork to glide into gear. Federer immediately broke back to love with his signature off-forehand cross-court winner, and Becker could not win another game. Federer held to love, broke Becker to lead 5-3 and then served out to love with a clutch of aces.

Of course, this being Basel, it was foolish to consider any other result in any other style. The second set had taken 28 minutes, produced six aces but brought his tally of converted break points to just three from 12. He afterwards admitted that some adjustments were needed:

“I should have taken some of the break points I had, maybe didn’t play with enough initiative: Some routine things to iron out, but that can happen in the first round. And he did serve well when it was important, credit to him.”

Fellow 30-something Frenchman, Julien Benneteau, was give an even tougher test by one of the fast rising players of the year, the 21-year-old Russian Andrey Kuznetov. It was an attractive match that brought two generations of attacking players face to face with plenty of network and nimble footwork. Benneteau lost the first set, 6-4 but then began to read the youngster’s game and came back to take the remaining sets, 6-3, 6-3.

The No3 seed, Richard Gasquet, played out his match against Dutchman Robin Haase in a similar pattern, losing the first set 6-4 before claiming the match, 6-3, 6-2.

And come tomorrow, the home crowd has more to cheer as another two Swiss men enter the fray. No4 seed and Swiss No2 Stan Wawrinka plays what could be a cracker of a match against Nikolay Davydenko, who is no slouch on indoor courts: He pushed Federer to a tight three-setter in Rotterdam.

Wawrinka is preceded by wild card Marco Chiudinelli, born within a month of Federer in the same city. Not surprisingly, they are close friends, but Chiudinelli’s tennis fortunes have been rather different. He has never won a singles title and sits at 149 in the ranking, and although he will have the Basel crowd behind him, no-one can replace Federer in their affections.

And Federer is minded to do his best for them in return.

“It’s all about trying to play my best, enjoy the crowd, and show them what I’ve got. Coming back here as world No1 is an amazing feeling in Basel. So I think more of that than of pressure of having to defend and to win again.”

There really is, for the man from Basel, no place like home.