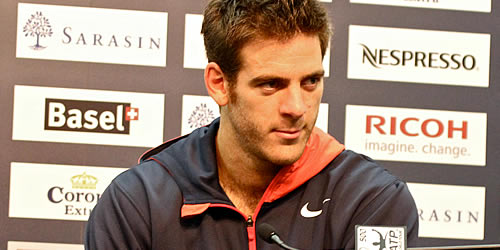 It was one of those bizarre moments that you get in tennis but in few other sports at the highest level of competition. On Basel’s Centre Court, where a couple of hours later they would play each other in the opening round of the Swiss Indoors in Basel, Argentine Juan Martin del Potro and Colombian Alejandro Falla were practising alongside one another.

They practised not across the net, nor did they play one after the other—which can provide interesting interactions when the fiercest of rivals like Novak Djokovic and Andy Murray arrive at and leave the same court with a chat and a back-slap.

They played next to one another: The left-handed Falla served to his knock-up partner from the deuce court and the right-handed del Potro from the ad court. And with both coming from Spanish-speaking South American countries, they could even have a chat in the process.

It was not as though the outcome of their match was insignificant. The No2 seed Del Potro is next in line to qualify for the World Tour Finals, sitting at No7, and with the next two in the race retiring in their first matches in Valencia, del Potro is primed to seal his London place with a good run in Basel.

He had faced the experienced Falla only three times before and beaten him in both meetings on Estoril’s clay. In fact, del Potro had to go back to 2006 at the US Open to find his only loss, when he was just shy of his 18th birthday.

All the cards certainly seemed stacked in del Potro’s favour, not least that he came to Switzerland on the back of winning the Vienna title last weekend.

Yet Falla, not far short of his 29th birthday, hit a career-high ranking of 48 this summer and remained on course for his highest ever year-end ranking.

The tall Argentine began well, breaking in the opening game and holding for a 2-0 lead. But Falla pulled back from a dangerous 0-40 down in the third game and attacked del Potro to earn break points of his own. It did not prove that easy for Falla and he had to win a good many more points through several deuces before del Potro hit a wild forehand wide and they were back on level terms.

The long service game clearly took its toll on the Argentine, and he took a brief medical timeout for some attention to his back, but he reasserted his dominance with a love hold of serve.

The Colombian continued to test him thoroughly, though: Falla is a compact muscular player, quick about the court and able to rush into the net on the back of a swinging left-hander serve. He also tested the del Potro movement with assorted drop shots, but the Argentine was up to the task and came out the better of one net exchange to break in the ninth. That was enough to take the set, 6-4.

After a lengthy off-court medial time-out, del Potro came back to open the second set just as he started the first, with a break and a 2-0 lead.

And despite looking desperately weary—he took his allotted time and more between each point—he did not let the advantage slip away this time. Indeed he broke again in fifth game for a 4-1 lead and once more in the seventh to sweep Falla aside in little more than a 20-minute 6-1 set.

After his record-breaking opening match in Vienna last week, 30 aces in three tough tie-breaker sets, this was a more lack-lustre affair. Three aces and just five break points converted out of 10 chances. He afterwards identified that as a significant problem, particularly in the first set:

“[The back] was feeling tight but nothing dangerous. I will take care of this, it will be better tomorrow…I didn’t serve like last week, my serve was slower. But it is good to get confidence by winning in two sets.”

The win does, of course, take him one step closer to London for the first time since 2009, a prospect he anticipates with great relish:
“Very important for me and very excited to part of those eight players. I’ve not qualified yet, I need to play more matches, but I’m looking forward to qualifying maybe this week.”

It’s been a while coming, a while since he won the US Open and reached London in 2009. But for the first time since he had major wrist surgery, it looks like he is back with the big boys. And with an ironic twist, he next plays Brian Baker who is also building a new career after years of injury problems.

May the best—and strongest—man win.