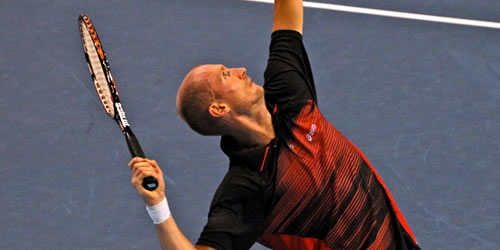 The problem with Nikolay Davydenko in recent years has been that, when he’s good, he’s very, very good, but when he’s been bad he’s not better, as the quote asserts, but—well frankly, very difficult to watch.

Davydenko, without the size, the physique and the power to develop one outstanding weapon, worked longer and moved faster than most of his opponents to build one of the most consistently good games on the tour.

It’s no accident that, when he broke into the top 10 in 2005, his stay was largely unbroken for almost five and a half years. During that time, he was in the top five for more than two years and became one of the most unrecognised—and to many, the most unexpected—winners of the World Tour Finals in 2009.

But the last couple of years have seen the wiry, smart Russian struggle with concentration and fitness. During 2012, he drifted outside the top 50, pulled out of tournaments five times, and lost from a winning position—at the US Open from two sets up, the Olympics from a set up, and the same in Miami and Nice—time and again.

He did the same against Roger Federer in Rotterdam, too: The Swiss survived only with his very best tennis against a Davydenko in terrific form. One wayward backhand in the final set was all that stood between the Russian and a third career victory over Federer. It recalled the inspired, tactical tennis that had won Davydenko the WTFs and, soon after, took him past the top two seeds, Federer and Rafael Nadal, in win the Doha title.

Since then, there have been occasional sparks of the same Davydenko—beating Tomas Berdych in the Paris Masters in 2010, Nadal in Doha in 2011, Richard Gasquet in Rotterdam this year—and now in Basel.

In truth, the Russian only produced his magic in fits and starts against the No4 seed Stanislas Wawrinka, but fortunately for him, that’s all he needed to do against a Swiss No2 who played even less consistently—and produced even more unforced errors—than his opponent.

Davydenko broke early in the first set, only to have Wawrinka begin to fire up his big serve to 135mph and then break the floundering Russian serve to level at 4-4.

The Swiss serve came to the rescue again when Davydenko worked another break chance with some nifty attacking play at the net. It was enough resistance from the Swiss to take the set to a tie-break and there, too, there was nothing to choose between them. Davydenko had the first chance to take the set but, in a moment that recalled his wayward backhand against Federer in Rotterdam, he did the same again here.

At his second attempt, the Russian netted a backhand drive volley, but a great drop volley gave him one more chance and this time a cracking return of serve finished off with a forehand winner did the job. Davydenko led—but could he stay in front?

The second set began with both men again making errors galore in a sluggish half dozen games, but things began to crank up nicely when Wawrinka came out on the losing side of two line calls and faced the rest of the set, from 3-3, with no remaining challenges.

It seemed briefly to inspire the Swiss and he served to save the set with another pair of 135 aces. After exactly two hours, they stood at 5-5.

Suddenly, Davydenko shifted up a gear, the head that had drooped in disgust a few games before now refocused, and he played out a crisp love service game to pile the pressure on Wawrinka. The Swiss responded in kind: It would be another tie-break.

And here came the missing spark into the Davydenko game: Those sharp, flat ground strokes angled like an exocet to the side lines; and the chess-like precision with which he can open one side of the court to fire a winner into the other. It takes perfect timing on the ball and a razor-sharp mind to execute such tactics, and when the two elements come together, it is—yes—very, very good.

Wawrinka stayed in touch with the Russian courtesy of a 137mph serve but could not counter a winning smash and, at 6-3, that signature cross-court forehand winner. Davydenko had the second set, 7-3, and the match, and he left the court, as he arrived, to muted, respectful applause.

The former world No3 will not be able to afford such hot-and-cold tennis in the rest of this tournament, for the door is closing on his 2012 campaign to win a title for the 10th straight year in his career.

The best wins of his 21 titles have come on courts such as these: in Moscow, at the Paris Masters and at the WTFs. But the draw has not been especially kind to Davydenko’s aspirations: Just as in Rotterdam, he could face Federer in the semis and, should he win, go on to meet Juan Martin del Potro in the final.

It will all come down, though, to whether the quiet man from Russia can turn on the heat—or in his case, the ice-cool accuracy—for an entire week. If he can, he is very nearly the measure of anyone.