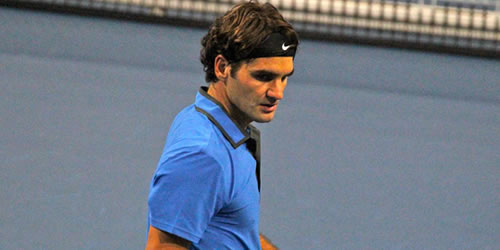 Roger Federer had only played the tall, aggressive left-hander from Brazil, Thomaz Bellucci, once before. However, that first meeting, in Indian Wells this year, was enough to alert him to the potential danger of this big shot-maker.

Back then, Bellucci was ranked No50 and he took Federer to three sets, eventually losing 6-3, 3-6, 4-6. Since then, the Brazilian had risen to No34, won the title in another Swiss tournament, Gstaad, and only days ago reached the final in Moscow.

Running Federer so close in Indian Wells clearly filled the Brazilian with confidence for, despite losing the first set in their second-round match, 6-3, courtesy of an early break, he did not back off.

Both men go for their shots, a tactic that can produce errors—and it did here. Bellucci made great play of his left-handed game to pound at the Federer backhand, and although that wing stood up to the pressure, Federer’s serve percentage dropped to 56, so his attempts to take the initiative at the net were often thwarted.

Federer found two aces when he was threatened on serve at 3-4, 30-30, but Bellucci continued to find creative solutions against a Federer pinned behind the baseline. The Brazilian made two delightful drop-shot winners to keep his lead at 5-4 and took the Swiss to a tie-break.

A combination of errors from Federer and a couple of huge forehand winners from Bellucci, earned the Brazilian a 6-2 lead, and the crowd could barely contain their nerves. The roars grew deafening as Federer crept back, point by point, to change ends at 6-6, but two more errors on the backhand gave Bellucci the set.

Federer had the advantage of serving first in the final set and began aggressively, serve and volleying for two winners and taking two more with big forehands.

It looked, for a moment, as though this would be over rather more quickly than the second set. Federer brought up break point in the second game but he fluffed a backhand, and there was not another chance on either side until they edged to the closing stages of what had the makings of another tie-break.

It was not. Federer, despite looking rather more on edge than his home crowd may have come to expect, managed to up his serving level from the 55 mark of the first two sets to 77 percent. The graph rose further in his favour as he also increased the percentage of those serves that he won. The combination took control out of the hands of the attacking Brazilian who blinked just at the wrong moment—serving to take the match to a tie-break.

Bellucci found himself facing his first break point since his opening serve of the set, and the precision engineering of the Swiss game did the business.

It had taken Federer the wrong side of two hours to take the slightly ragged win, 7-5, but he was quick to credit his opponent for that: “I think he’s a good player: good serve, good intensity, and good decision making from baseline. It was a close match today.”

Federer left Centre Court to find himself the only Swiss man of four starters to reach the third round. Earlier in the afternoon, the talented but still inconsistent young Henri Laaksonen lost to Paul-Henri Mathieu in an entertaining, attacking two sets of tennis, 6-2, 7-5.

There are some attractive elements in the Laaksonen game that bear a resemblance to the man that many have likened to Federer himself, Grigor Dimitrov. Both youngsters show little fear in taking on their shots, use variety off the ground and around the net, are rangy and wiry, and show a different side of the young tranche of players pushing their way up the rankings.

The Federer-redolent Bulgarian won a riveting match against another crafty Frenchman, Julien Benneteau, in a match that went to three tie-breakers and produced 17 aces from the elegant 21-year-old.

In another meeting between Switzerland and France, Federer’s long-standing friend and wild card in the Basel drawer, Marco Chiudinelli, could not handle the flair of No3 seed Richard Gasquet, losing 6-1, 6-4.

So Federer finds himself the solitary Swiss in the draw, but then that is nothing new. His next opponent is yet to be decided—either another French talent, Benoit Paire, or the Polish 30-year-old, Lukasz Kubot—but Federer will enjoy a day’s rest after the trials of Round 2.

He identified the part of his game that still needs some fine-tuning: “I think I struggled on the return.

“I think I served well, I served smart, I played that part really well…I’m not too happy with my returning, but then [Thomaz] is a lefty, it is a change. But I would have hoped to have done a bit better.”

It’s his usual pattern to do a bit better with each successive round, and his Basel fans will be hoping that he does not depart from their script.