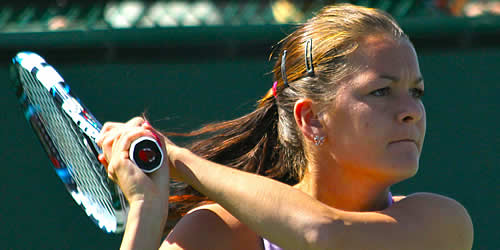 Agnieszka Radwańska has targeted a semi-finals appearance after the fourth seed eased to a straight-sets victory over Petra Kvitova at the WTA Championships.

The 23-year-old defeated the defending champion 6-3 6-2 in the White Group, with Kvitova’s 25-game winning run on indoor courts coming to an emphatic end.

Radwańska was pleased to start with a victory at the season-ending tournament ahead of her clash against Maria Sharapova on Wednesday night.

“The first match is always tough and adjusting to a new surface is never easy, but I was playing really well from the beginning to the end of the match.

“It was still a little bit up and down today. There were a lot of breaks of serve in the match – the serve should be a big weapon, and it wasn’t in this match!

“But I just stayed focused and I’m happy I closed this match out in two sets.”

She added: “The atmosphere here is always great. I remember the crowd last year.

“They really love tennis and are so supportive. For sure I enjoy playing here, and I’m really happy to be back again.

“I hope this year I can make the semifinals, at least.”

Elsewhere in the Wine Group, Sharapova notched up a 6-3 6-2 victory over Italian Sara Errani in a repeat of the French Open final earlier in 2012.

The world number two has endured a demanding year, but Sharapova is ready for one last push in Istanbul before some time off.

“This is such a great feeling, not only to make it here but to feel good physically,” Sharapova said.

“When you’re out here and feeling good it’s such a big motivation, and it’s the last tournament of the year too, so while I’m going to enjoy some time off after this, right now it’s all business.”

“I really wanted to win today obviously. When you are playing anyone in the top five you just are trying to play better,” Williams said. “[Kerber] won the last time we played so I really just wanted to do well today.”