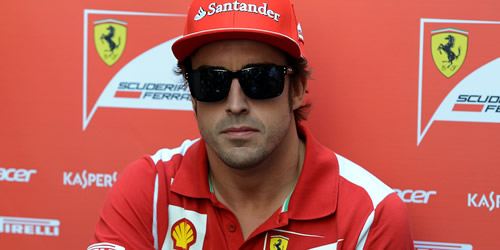 Fernando Alonso admits he is not expecting Ferrari to be able to match Red Bull’s pace at this weekend’s Abu Dhabi Grand Prix.

The Spaniard is currently 13 points behind championship leader Sebastian Vettel heading into Sunday’s race and concedes it will be difficult to close the gap on the German, who edged closer to retaining his world title with victory at the Indian Grand Prix last weekend.

“We’ve made some good preparations and there are some new parts coming that we will have to check tomorrow,” said Alonso who finished second in India last weekend.

“We don’t think that we will close the gap completely to Red Bull five days after India, I don’t think there is any magic button or magic part in Formula One [that can do that], but we will try to get closer and put some more pressure on them.

“They have had four very easy races where they have had a lot of margin and they can make little mistakes without any penalty, so we want to be close enough to take advantage of anything they don’t do perfectly.

“We need to find perfection over these next three weekends and attack all through the races.”