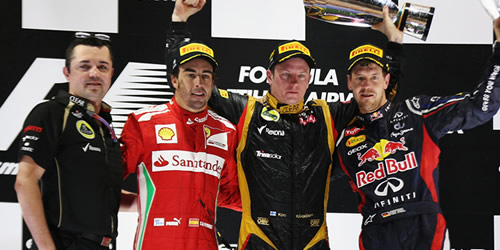 Lotus’ Kimi Raikkonen emerged victorious at the Abu Dhabi Grand Prix in a race that will prove decisive in the world championship title race.

Making him the eighth different winner of the season, the Finn gave Lotus their first win since 1987 as he topped the podium for the first time since the Belgium Grand Prix in 2009.

Diving into second position from the start, the race became Raikkonen’s once McLaren’s Lewis Hamilton suffered an electrical failure.

In a race which saw seven drivers retire, Fernando Alonso finished in second position ahead of Sebastian Vettel, who completed the podium despite starting from the pit lane.

The German, who was excluded from qualifying after running out of fuel, was helped by two safety car periods and what seemed to be self destruction from the rest of the field.

Despite starting from the back of the grid and pitting for a new front wing after two damaging collisions, Vettel has held onto his championship lead by 10 points.

“Last time you guys were giving me grief because I didn’t smile enough but I’m happy for the team,” said Raikkonen.

“It’s been a hard season and not easy times lately. Hopefully this will give everyone belief and turn the tables so we can win more races, if not this year then next year.”

“I was really hoping to win before. I’m happy but there’s nothing to jump around about.”

“We’ll try to do the same again. We’ll have a good party and tomorrow when we’re feeling bad after a long night we’ll remember why we feel like that but I’m just happy for everyone in the team.”

It was an action-packed start to the grand prix, with racing not properly commencing until lap 14.

McLaren’s Hamilton blasted off the front of the grid, with Lotus’Raikkonen and Ferrari’s Alonso leapfrogging Mark Webber’s Red Bull to shoot into second and third place.

The Finn almost made it past Hamilton as the British driver’s cold tyres sent him off the track – but he somehow held onto his lead.

A first-corner collision between William’s Bruno Senna and Nico Hulkenberg saw an early retirement for the Force India driver.

The fellow Force India of Paul di Resta also suffered damage on lap one, while Lotus’ Romain Grosjean and Mercedes’ Nico Rosberg made contact, leaving the former with a puncture and the latter with a broken front wing.

Vettel was the big winner of this early drama, as with cars limping back to the pits, the German driver had made it into 12th by lap 9.

However, things did not go so smoothly for the German as a massive collision between Rosberg and Narain Karthikeyan on lap nine brought out the safety car.

With the HRT emitting smoke, the Mercedes driver was caught unaware, smashing into the side of the slower car and sending himself airborne and into the barriers.

Scattering debris across the road, both drivers walked away unscathed but the safety car was brought out for six laps.

Meanwhile, Vettel, who had broken off a part of his front wing after hitting Bruno Senna on the first lap, was caught out by a braking Toro Rosso in front of him.

Swerving into a polystyrene speed board, the German driver narrowly avoided the Armco barrier and was forced to pit for a new front wing, putting him back into 21st place.

Vettel then caused controversy as he tried to overtake Romain Grosjean and made an illegal overtake by putting all four tyres off the track to complete the move.

Red Bull opted to concede the place in order to avoid a drive through penalty, leaving Vettel to make the move for a second time.

Hamilton was the next casualty as he was forced to park his McLaren on the grass for the second time in five races after experiencing an electrical failure.

Despite outstripping the rest of the grid in pace all weekend, the British driver was once again let down by his car in scenes that mirrored the other night race of the season in Singapore, when Hamilton had been comfortably leading the race.

Hamilton’s departure left Raikkonen, the man placed third in the drivers’ championship, in first as Alonso dived into second.

The spotlight then moved to the importance of team-mates as Red Bull’s Webber had to overtake Ferrari’s Felipe Massa.

But it was the Brazilian who lost out as he spun across the track, allowing Vettel to sneak through in the cloud of smoke.

All eyes then turned to the battle between the Red Bull team-mates as championship leader Vettel closed in on fourth-placed Webber.

With the Australian saying at the Indian Grand Prix that he would not move out of the way until it was mathematically impossible for him to win, Red Bull sent out the inevitable call for Webber to not fight his team-mate if he got a run.

But it seemed the team decided to take the decision out of their driver’s hands as Webber was instructed to pit, allowing Vettel to sail past.

And that was not the end to the drama as the Abu Dhabi Grand Prix descended into anarchy, with the safety car brought out for the second time.

Sauber’s Sergio Perez kicked off a chain of events which caused absolute carnage on the Yas Marina Circuit as he tried a move around the outside of Paul di Resta.

The Force India was forced onto the grass but as Perez pulled back onto the track, he collided with Lotus’ Grosjean and collected the Red Bull of Webber, who had been put into the traffic after his pit stop, in the incident.

Perez earned himself a ten-second stop-and-go penalty for eliminating Webber and Grosjean from the highly-charged race.

With the race recommencing on lap 43, attention returned to the front of the grid, with Raikkonen leading Alonso to Jenson Button to Vettel.

With critics saying that Vettel’s weakness is his inability to overtake, the German was given the opportunity to prove them wrong.

It took him eight laps, but the German eventually passed the McLaren of Button to rapturous applause from the Red Bull garage.

Meanwhile, Alonso closed the gap to Raikkonen to under a second but did not have enough laps remaining to put himself on the top of the podium.

Both Alonso and Vettel proved that they have the mettle to win this year’s drivers’ championship as the gap closes to a tantalising 10 points with only two races remaining.

If Vettel can score fifteen points more than the Ferrari driver in Austin, Texas in two weeks time, he will secure his third consecutive world title.