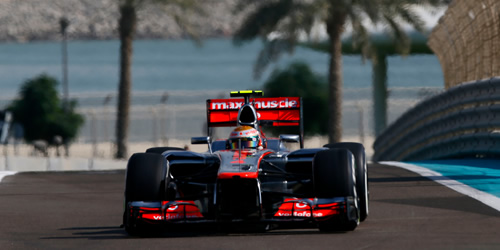 Hamilton beat Webber by 0.348 seconds to ensure Red Bull did not lock out the front row for the first time since the Singapore Grand Prix in September.

“I’m very excited,” said Hamilton. “It’s the first time for a long time to be ahead of the Red Bulls and starting at the front.

“It’s going to be tough in the race and I hope we are strong enough to fight them once again.

“The car’s felt beautiful all weekend but we’ve not made any improvement since last weekend so I guess it just likes the track and hopefully it will continue to like it tomorrow.”

“Credit to Lewis and McLaren – they have a quick car and we’ve been bumped off the front row for the first time in a while,” he said.

“We did the best we could, it was a pretty smooth qualifying and we’re still a long way up the grid. There’s a little bit of friendly fire going on which we need to tidy up.

“Seb’s still involved in the drivers’ championship and there’s the constructors’. The car is working pretty well on Sundays but Lewis and Jenson have done some pretty strong long runs as well.”

Vettel added: “I’m not entirely happy with the last part of qualifying. It was quite tricky for me. I should have been a little quicker. I think we can be happy overall. The race pace should be good tomorrow. I’m looking forward to it.”

Ferrari’s Fernando Alonso endured a dismal session and will start from seventh on the grid, severely hampering his chances of closing the 13-point gap to championship leader Vettel.

McLaren’s Jenson Button struggled and will start from sixth, behind Lotus’ Kimi Raikkonen and Williams’ Pastor Maldonado in fourth.

“It was not very good,” said Button. “All weekend, the car has been very good. The pace has been there but in qualifying I had too much lap time.

“If I knew why, we would have sorted it out. We will look at it when I get back. Obviously the car is quick, Lewis is on pole by quite a bit.

“Most of the weekend, I’ve felt happy. I don’t know where that has has gone. We just about got into Q3 as well.”

Lewis Hamilton does not expect to challenge for title in 2013