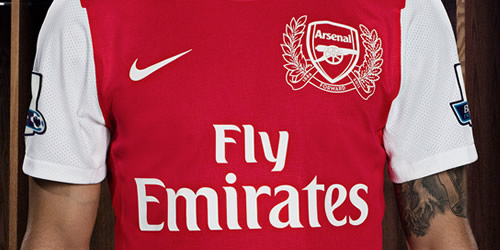 Arsenal have announced a new £150m shirt sponsorship deal with Emirates Airlines until the 2018-19 season.

The agreement, which also includes the retention of the naming rights to Emirates Stadium, is a five-year extension to the airline’s original partnership with the north London side.

“This is an exciting day for Arsenal and all our supporters,” said Arsenal chief executive Ivan Gazidis.

“This agreement is a testimony to Arsenal’s approach and to the capabilities we have developed in recent years as well as the strength of our partnership with Emirates.

“The original deal with Emirates was a key facilitator of our move from Highbury and this next phase of our relationship will be just as critical to keep us at the top of the game in England and Europe.”

“Arsenal’s strong appeal around the globe and ambitious approach to the game parallel our own approach to business, making them a valuable partner for our brand,” said Sheikh Ahmed bin Saeed Al Maktoum, Emirates chairman and chief executive.

“We continue to see immeasurable value in our global sports sponsorships and our sponsorship with Arsenal is no different.”

Emirates first signed its sponsorship agreement with Arsenal in 2004, providing the airline with naming rights to the stadium until 2021 and a shirt sponsorship that began in the 2006-2007 season.