Roger Federer wins the Fans' Favourite award for the 10th successive year, as Novak Djokovic ends the season as world No1 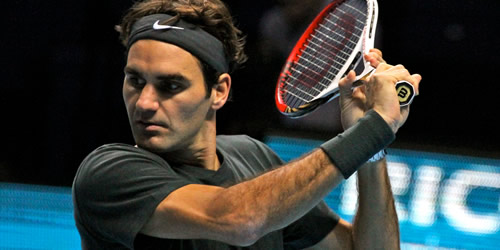 The popularity of Roger Federer seems to continue undiminished. Yet again, he has been honoured by both his peers and by tennis fans in categories that are decided by ballot in the ATP World Tour Awards.

On the fans’ side, the World Tour Finals defending champion has taken the Fans’ Favourite Award for the 10th consecutive year, while by the players, he has been selected for the Stefan Edberg Sportsmanship Award for and eighth time. The two awards take 31-year-old Federer’s total number of ATP awards since 2003 to 24.

Djokovic also took two awards this year. Having sealed the ATP World Tour No1 award just over a week ago for a second straight year, he was also selected as the Arthur Ashe Humanitarian of the Year for his contributions through the Novak Djokovic Foundation, his role as a UNICEF ambassador and other charitable ventures.

In doubles, it was again the Bryan brothers, Mike and Bob, who dominated. They have once again received two doubles awards: the ATP World Tour No1 Doubles Team—for the fourth consecutive time—and the Fans’ Favourite nod. The 34-year-old twins have now won each award a record eight times.

Another enduring name on the tennis tour, and one of the most admired for his repeated returns from injury over 16 years as a pro, is Tommy Haas.

The 34-year-old German, who began the year outside the top 200, is now at 21, having reached three finals this season and beating Federer to take the grass titles in Halle. His efforts have been acknowledged by his fellow players with the Comeback Player of the Year award.

Haas was out of tennis for 14 months from February 2010 to May 2011 following hip surgery, the latest in a catalogue of surgery and injury problems as well as a near fatal accident that almost claimed the lives of his parents in 2002, the year he reached No2 in the world. This year, he recorded his 500th match win in Vienna and reclaimed the Comeback award that he also won eight years ago.

At the other end of the scale, the 23-year-old Martin Klizan won the Newcomer of the Year award, having jumped 88 places in the rankings since the start of the season to reach a career-high No29. The man from Bratislava beat Jo-Wilfried Tsonga to reach the fourth round of the US Open and went on to win his first ATP title in St Petersburg.

Also selected by fellow players, the Most Improved Player of the Year was given to 27-year-old Marinko Matosevic, who ended 2012 as the top-ranking Australian at a career-high 47. He reached his first final in Delray Beach as a qualifier ranked No173, and also reached the semifinals in Los Angeles.

Most Improved Player of the Year: Marinko Matosevic

Newcomer of the Year: Martin Klizan

Tournaments of the Year: yet to be announced in following categories: