ATP World Tour Finals 2012: Marianne Bevis looks ahead to the season-ending tournament at The O2 in London

With two days to go until the biggest indoor tennis tournament in the world gets under way—and with one man still in action across the English Channel in Paris—the group draws have been made.

Chris Kermode, Director of the World Tour Finals at the iconic O2 arena, presided as the eight names were pulled from the shimmering silver trophy, and he predicted that this year’s event would see the one millionth fan walk through the doors to enjoy the climax of what he considers “the best year in men’s tennis that I can remember.”

With No1 seed Novak Djokovic heading Group A of the round robin phase and No2 seed Roger Federer heading Group B, the names of the next seeds were the pulled out in pairs in ranking order.

The biggest question, in the absence of Rafael Nadel this year, was where No3 Andy Murray would fall, and that was the first to be answered. His name came out first, and he took his place in the Djokovic pool. That put No4, David Ferrer—still playing in the last Masters of the year in France—in the Federer pool.

Also in the Swiss pool was Juan Martin del Potro, who memorably beat the Swiss last week in the final of Federer’s home tournament in Basel for the first time since the World Tour Finals in 2009.

The Argentine, having missed 2010 due to wrist surgery, has gradually been climbing back to near the form of his 2009 level, and although he had played and lost to Federer six times in 2012 before Basel, their matches at the French Open and then the Olympics were two of the most competitive on the tour.

Del Potro, with his usual modesty, played down his chances here in London ahead of the tournament:

“It’s an honour to be part of those eight players…they are favourites more than me, but just to be here is a like a gift after my injury.

“I am not the same person [as in 2009]: I’m not the favourite for the tournament…but after tough losses this year, [to beat Federer in Basel] was really big for me. After that victory, I can do maybe the same.” 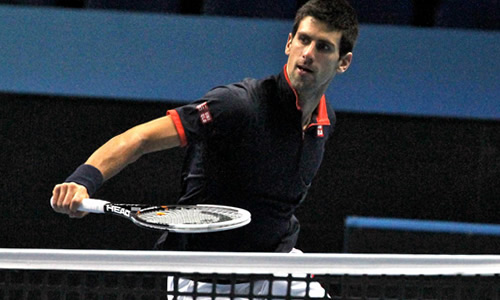 Novak Djokovic, who is guaranteed the end-of-year world No1 ranking, takes on Jo-Wilfried Tsonga on Monday

But for rivalry, the Djokovic-Murray one takes some beating. They have played six times this year, including a five-set semifinal at the Australian Open, the final of the Miami Masters, the semis of the Olympics, and two intense and exhausting finals, first at the US Open and most recently at the Shanghai Masters.

He would not be drawn, though, on whether he regarded his pool as the harder of the two:

“Against all the top guys here you’re going to have to play top quality matches to win.

“Indoors, Roger’s been the best player of the last couple of years, I would say, and Juan won two tournaments indoors just before Paris…it depends—if everyone plays their best tennis, I don’t think one group will necessarily be tougher than the other.

As for how he felt about playing in front of his home crowd for the first time since becoming a Grand Slam champion, he sounded little different from the man who has played the tournament the last four years:

“I feel maybe a little more relaxed coming in this year than I have done in previous years because I’ve managed to win the US Open. But there’s going to be pressure on me here to play well. The only thing I can guarantee is to give 110 per cent on the court, fight as hard as I can to the end of all of the matches and see where that gets me.”

Meanwhile, he took to court in this spectacular arena for a bit of practice—against Djokovic, and with Ivan Lendl looking on.

Novak Djokovic: won WTFs in Shanghai in 2008; Has qualified for the sixth straight year, and has a 9-9 record at the tournament.

Andy Murray: Reached two semis at WTFs in 2008 and 2010; has qualified for fifth straight year, and has a 7-5 record at the tournament.

Jo-Wilfried Tsonga: Finalist in 2011; Qualified for third time since his his debut in 2008 and has a 4-4 record at the tournament.

David Ferrer: Finalist in WTFs in 2007: Has qualified for third straight year and fourth time overall.

Juan Martin del Potro: WTF finalist in 2009; Has qualified three times, though this is the first since 2009; has a 4-4 record at the tournament.

Janko Tipsarevic: Was alternate at WTFs in 2011 and replaced Murray for two round robin matches; Qualified outright for for the first time this year.

Pool A plays Monday 5 November
Not before 1.45pm—Murray v Berdych
Not before 7.45pm—Djokovic v Tsonga

Pool B plays Tuesday 6 November
Not before 1.45pm—Federer v Tipsarevic
Not before 7.45pm—Ferrer v del Potro