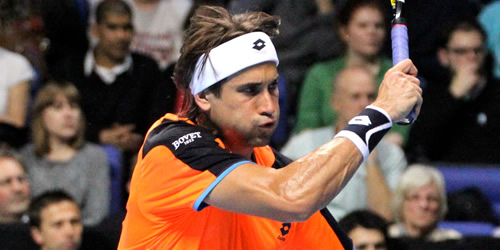 Looking at the career record of Juan Martin del Potro, and at his size and his power, it may come as a surprise that he has not beaten the 30-year-old, 5ft 9in David Ferrer, famed in his early days as a clay court terrier, since early summer 2009.

Since the Argentine’s return to the tour, and his climb back into the elite group after missing 2010 for wrist surgery, Ferrer had beaten him not just on clay in Davis Cup—a five-set thriller in last year’s final—but on the hard courts of Miami and grass of Wimbledon, both this year, both without dropping more than three games a set.

For now more than ever, Ferrer has proved himself a jack of all trades, a player for all courts and against almost all players. Coming back from his own dip in form and confidence in 2009, he is now enjoying his best ever season, tops the table in match-wins and titles this year, and has just won two straight indoor titles, including his first Masters.

But then del Potro’s year has shown that he belongs to be back with best, too. He comes to London on the back of an indoor title, beating Roger Federer in Basel, and having taken the Swiss to the brink in their two previous meetings—a five-set tussle on the clay of the French Open and a 19-17 final set on the grass of the Olympics.

As Federer pointed out after his earlier match in the same Group, he intended to do some homework on both of them:

“I’ll try to watch tonight’s match and get some info on how both are playing, how David’s pulled up after his great win in Paris, how Juan Martin is playing after Basel and Paris. Interesting matchup tonight, no doubt.”

Ferrer started like a bull out of the gate—his brilliant day-glo orange vibrating against the complementary blues of the arena. Against his characteristic soundtrack of low grunts, he powered the baseline and galloped to the net as need required. It seemed as though del Potro could not react fast enough to the Ferrer shots, defence and dazzling movement.

The Spaniard faced a break point in the third game, held it with a net charge and then took on del Potro in the next game to earn two break chances of his own. Again del Potro could not react at the net and an error conceded the break. And it almost became two breaks in the sixth game, but the Argentine resisted two threats. It was a brief reprieve, though: Ferrer served out the set with ease, 6-3.

The second set began with Ferrer still in terrier mode, and he looked certain to break in the third game with four chances to take the lead. Twice a del Potro ace saved the point, twice a forehand winner.

As so often in tennis, what doesn’t kill you makes you stronger, and del Potro began to crank up the forehand that had saved the break and used it to break Ferrer. The Spaniard held onto del Potro’s tailcoat, continued to draw on his huge reserves of energy to defend, and then came close to a break back at the last moment, with del Potro serving for the set.

But the punishing Argentine forehand opened up the court and he finished the job with a deft drop volley, 6-3. As many had predicted, this would need a third set.

It looked like a case of ‘last man standing’, and the Argentine was having to summon from his depths to chase down shots across the baseline and then return with enough depth and angle to beat Ferrer.

The third set quickly suggested that it was the Spaniard who could survive. He broke in the second game with some inspired cross-court passes to take a 3-0 lead. Already his winners tally was close that of the whole second set: The question was whether he could also improve his second-set serving percentage, which had dipped to 52.

Sure enough, at 4-1, he was back to over 80 percent, with 10 winners on the board to del Potro’s two. He was scowling with effort, and by Ferrer standards, looked exhausted. It would depend upon del Potro firing through his opponent with power.

With two hours on the clock, it was in fact the backhand that brought up break point for the Argentine, and the trusty forehand that finished off. They were back on serve, and a forehand winner ensured it was 4-4.

Ferrer needed to reassert his stamina on the match, and a love hold of serve did just that. And he drew deeply on his second wind, bouncing and bustling on the baseline to receive del Potro’s serve.

Ferrer boldly stepped in to attack every ball on the rise, firing them from side to side, forcing the heavy-legged del Potro beyond his limits. In a flash, he had taken four straight points, taken the match, 6-4, and taken his winning streak to 11.

That was not all he had done. He has become the first player to win more than 30 matches in a season on both clay and hard courts since Nadal in 2007. And in doing so, he kept alive his hopes of overtaking his compatriot to become the top ranked Spaniard for the first time in his career. Should he reach the final, as he did in 2007, having won two round robin matches, the job is done.

In typically modest style, Ferrer shrugged that off as irrelevant:

Looking at the way this man goes about his business, that is entirely in character. But what a way it would be for this tennis warrior of 12 years’ standing to cap the best year of his career.