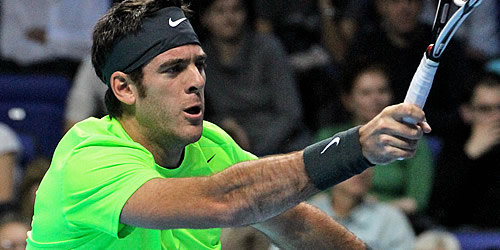 The final day of round-robin competition brought one of the most highly anticipated matches of the week—an extraordinary eighth meeting in 2012 between two of the most popular players on the tour, Roger Federer and Juan Martin del Potro.

The result would play a major part in deciding whether Del Potro could advance to the semi-finals or whether David Ferrer—who beat the Argentine earlier in the week—would take the second spot in Group B. A Del Potro win would guarantee his place in the last four for the first time since 2009, while various permutations of such a win would determine whether he or Federer topped the Group.

And it was a very tough one to call for despite the overall advantage Federer held between the two—13 wins to three—the nature of their contests, and the timing of the Argentine’s victories, were highly significant.

In many ways, they are like chalk and cheese. The Swiss man’s famed balletic movement belies an athleticism, speed and shot-making weaponry honed over 14 unbroken years on the tour. He can beguile with placement, spin and touch but can also strike with a whip of a right arm—often on the backhand but most often with a rapier-like forehand.

The Argentine is a big man who makes up for a lack stylistic grace with a jaw-dropping power wielded from one of the strongest right-arm-and-shoulder sweeps in tennis. The serve and forehand he can generate make him a formidable foe, but his surprising mobility and constantly improving backhand complete the formidable package.

And while Del Potro may be just 24, and may have missed the whole of 2010 for wrist surgery, until this summer he was the only man to have broken the Grand Slam monopoly of Rafael Nadal, Novak Djokovic and Federer.

That was in 2009, the year that the Federer-Del Potro rivalry really began in earnest. When they met in the semi-finals of the French Open that year, with the Argentine newly into the top five, Del Potro took a two-sets-to-one lead over Federer before losing in five. With the US Open, it was a different story. He came back from two sets to one down in the final to take his first Grand Slam. And he went on to beat Federer in this very event the same year at the same Round Robin stage.

Del Potro lost in the final that year, and spent much of 2011 climbing back up the rankings after his year-long absence. So until 2012, he had played Federer only one more time—but they soon made up for lost time.

Dubai went to two tie-breaks and Roland Garros saw a near-replay of their 2009 meeting—though this time, Federer went two sets down before coming back to win. In London, they fought for an Olympic medal and played out one of the sets of the year in the third, a 19-17 match-winner for Federer.

So while the Federer record at this tournament may have been intimidating to most—the Swiss was on a 12-match streak, has the most WTF titles and match-wins at six and 41 respectively, and had already reached 70 match-wins and six titles this year—del Potro was justified in feeling confident. Not only did the Argentine have a career-high 64 match-wins this year but he had won three indoor titles this year as well as reaching the final in Rotterdam.

It looked at first as though Federer would take a quick lead for, despite several careless forehand errors, he looked in control and, by the fifth game, cranked his serve up to make four straight winners for a love hold.

Del Potro replied in kind, but his next serve, in the eighth, came under heavy pressure as Federer moved the Argentine around, wrong-footing him with some neat cross-court forehands. The Swiss attacked the net to take a 40-15 lead, only to see his chances pegged back by a del Potro ace and a huge forehand onto the baseline.

Federer got another chance when the Argentine hit a forehand wide, but one of the 22 Swiss’ backhand errors in the match wiped it away.

Neither man earned another break chance, though Federer did come out the better from a glorious passage of play in the ninth game. There were drop shots, retrieved lobs, hot dogs—a full array in mirror image across two different points. They enjoyed it as much as the crowd, their faces beaming as del Potro took the game to deuce. A Federer ace held the game—and there were just two more points against serve between them on the way to a tie-break.

Against Del Potro, it is not the safest way to end a set—it is how the Argentine sealed that final in Basel. On this occasion, as then, Federer did not get a look-in. His error count continued to rise—a long forehand lost one service point, a shanked forehand a second, and a backhand wide another.

In truth, it had looked as though Federer was struggling to concentrate, but that all changed at the start of the second with a surprising break to love and then a hold to love from Federer.

Del Potro steadied things after that quick break and dropped only five more points on his serve, but Federer only dropped five point on serve in the whole set. The one break and 35 minutes was enough, and the Swiss served out the set with an ace, 6-4.

Now another man’s fate was in the balance. Ferrer waited in the wings to conclude the round-robin phase of the tournament, but unless Federer won, his tournament was over. At stake for the Spaniard was not just a semi-final place but the chance—should he reach the final, too—of emerging from the shadow of his formidable compatriot, Nadal.

For with Nadal out of tennis since Wimbledon nursing an injury, the door had opened for Ferrer to cap the best year of his 12-year career as the top-ranked Spaniard: his own small piece of history.

But Del Potro would take the remaining semi-final place if he beat Federer, as the Swiss was only too aware. He was, afterwards, surprisingly open in expressing his disappointment for the Spanish man—for Federer was not able to earn the man he respects so highly his chance at the top of Spanish tennis.

“I was thinking more about David than I was thinking about [whether I would play] Andy and Novak, to be honest. I really wanted to give him a chance and give myself the best possible preparation for the semis, really hoped I could win. Not that I prefer David over Juan Martin, no, not at all. [But] I think he’s had a stellar season… more disappointed for him than I am about losing today, to be quite honest.”

Del Potro imposed himself on the third set from the start, serving to love and then earning a break point on the Federer serve. The Swiss errors returned—this time a shanked backhand—and another love game from del Potro took the score was 3-0.

Federer’s serving was strangely erratic, his first serve percentage dropping to 50 though he only dropped four more points when serving. His ground strokes were also erratic, some firing for winners—43 of them in the match—but many going down as errors—42. And del Potro smelled victory. He not only dropped just two more points on serve in the entire set, he made only three errors in total.

With such inconsistency weighed against consistency, there was no way back for the Swiss and a jubilant del Potro served it out 6-3, knowing he was back amongst the big-boys with a vengeance. Indeed, he showed a humorous ‘edge’ when asked whether he was now at his 2009, top-four level:

“I don’t know what I have to do to answer the question differently. I won the bronze medal in the Olympics. In the photo, you can see Federer, Murray and me. Now Murray in semis, Djokovic, Federer and me. I just try to do my job. I don’t care if I’m playing better or not than 2009 when I won the US Open. Just be happy to play tennis again after my serious wrist problem. Maybe I work to be better in the future, to fight in the Grand Slams tournaments.

“I don’t know who is the favorite No1. Djokovic, Murray or Federer can win the tournament. I can tell you I’m the No4 for sure also. Everything can happen.”

The role that Ferrer will play, in his own ‘dead’ match against Tipsarevic, is to determine whether it is Federer or del Potro who tops the Group. But when the opposing two players in the semis are Murray and Djokovic, that amounts to Hobson’s choice. Come Monday, the trophy could be in the hands of any of the four.