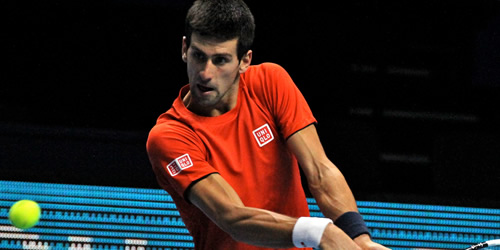 World No1 Novak Djokovic may have opened proceedings on day one against Jo-Wilfried Tsonga, teasing the crowd with a close first set before closing it out in his usual style in the second set.

World No2 and six-time World Tour Finals champion Roger Federer may have drawn the crowds on day two, and taken a clinical 6-3, 6-1 win over Janko Tipsarevic.

But there were two key matches that everyone relished as soon as the draw was made.

In Federer’s pool, it was the prospect of an eighth 2012 meeting against Juan Martin del Potro, a pair whose rivalry had seen two of the most competitive matches of the year at the French Open and the Olympics—and then a win for the Argentine at Federer’s ‘home’ tournament in Basel.

And in Djokovic’s pool, it was the latest iteration of possibly the most fascinating rivalry in tennis since the evolution of the one between Federer and Rafael Nadal. He and Andy Murray had already played six times this year in a rivalry spanning six years and 16 matches. What’s more they are friends, were born just a week apart, and grew up on the tour together. And they routinely practise against one another at tournaments—starting with pre-competition Saturday at the O2.

Their matches are made particularly intriguing by the similarities in their games, too. Both are outrageously fit and fast, two of best defenders on both wings, and able to turn those defensive shots into attack in the blink of an eye, whether by flat down-the-line power or by spinning cross-court passes. As Djokovic said of their forthcoming match:

“We’ve played each other enough to know what to expect. We do practise with each other quite a lot too, but it’s never quite the same as matches, that’s for sure.

“When I play Andy I need to be ready for long rallies and a physically demanding match.”

Murray’s view was, as one would expect, very similar:

“For me there’s an understanding of how much you have to put into the match to win it…Both of us are very good retrievers so often the points will go on a lot. Sometimes you feel like you maybe need to win the point two or three times, which is tough and can be a little bit tiring.”

Murray can rarely be accused of overstatement. Their matches this year had included a five-set, 4hr 50min semifinal at the Australian Open, the final of the Miami Masters, the semis of the Olympics, a 4hr 54min five-setter in the final of the US Open and, most recently, a 3hr 21min final at the Shanghai Masters—and the honours were split right down the middle.

And Murray’s home crowd—more behind their newly-crowned Grand Slam champion than ever before—could not wait for only the second indoor encounter between the two since their very first match in 2006. They were ranked 17 and 19 back then, met in the third round of the Madrid Masters—and that, typically, needed three sets to decide: The winner was Djokovic. It was prescient.

And it was Murray who shone in the first set: Having chosen to receive first, he wasted no time in attacking the Djokovic serve and broke with a winner at the net. He then held to love, firing a first 132 mph ace in the process.

Murray continued his near serene progress through the whole set, relaxed, focused and missing not a point on his first serve and only three on his second serve. He came close to breaking to take the set at 5-4 when he pulled Djokovic back from 40-0 through three deuces. The Serb finally held, but Murray made no mistake in serving out to love, 6-4.

It meant that Djokovic opened serve in the second and he regrouped in style with a love opening game. But it was a case of punch and counterpunch, both trying forays to the net, both alternating strong love holds with scattered errors, forced by the low, penetrating balls they fired at one another.

Murray earned the first break opportunity—luckily as it happens, when a net cord took a Djokovic ball wide—but the Serb held on, and took advantage of a growing number of errors from Murray to attack the net for a break point of his own. It was his only chance of the set, and it was decisive. Each man would only lose one more point on serve in the set, with Djokovic serving it out to love, just as Murray had done in the first.

For the conclusion, Murray served first and he opened his account with an ace to complete a love hold. Djokovic also opened strongly, but as the set unfolded the errors increased and the serving level dropped.

There was a mood of frustration on both sides of the net, plenty of head shaking, complaints about off-court distractions—but Murray had greater cause to be annoyed with himself. In the third game, Djokovic went 40-0 up against serve, and broke on the second point courtesy of another Murray error.

It began to look all over in the fifth when Murray came under huge pressure on serve again. He netted a backhand volley to offer up one break point, survived, and then faced two more as the Djokovic forehand fired up. Murray survived to stay in touch at 4-2 down after two hours of leg-deadening effort, and he survived another break point in the seventh.

But now it was the Serb’s turn to make mistakes and, against the flow of the set, Murray drew a couple of errors to earn break-back points. Djokovic hit wide and they were all square. The crowd could not believe it and seemed determined to drive the momentum Murray’s way. But Djokovic had plenty of support, too:

“I could always focus on those supporters, they were with me throughout the match.”

One of them was much too enthusiastic, shouting out just as Murray served at 15-15, 5-5. The Briton netted a forehand then fired a backhand long: It was two break points. A 133 serve saved the first but another long backhand gave away the break.

Still it was not done. Murray dug deep, chiding himself, urging himself on—and the crowd did their part to get him to 40-15 on the Djokovic serve. Would this be a tie-breaker after all?

Alas for the home team, the Djokovic serve that had hovered at just 50 percent for the set, came good—or rather the eagle-eyed focus that Djokovic so often finds at the crucial moments. He reeled off four big serves and won, 7-5, what may become a vital win in this round robin format.

Djokovic summed up the contest:

“Another great performance from both of us. I hope that people who watched it agree with my opinion. I didn’t expect anything less, you know, other than a tough match that went to the wire and was decided in the last point.

“I don’t think I played bad in the first set. It was him playing really well…And then, you know, he made some unforced errors—allowed me to get back to the match. Then I think it was quite even up to the last point.”

It had, certainly, been almost too close to call. They both made over 40 errors, outnumbering 23 winners for Djokovic and 28 for Murray: the result of each playing one of the best returners in tennis.

But in the final 72-minute set, Murray made 21 errors and just 12 winners—and that turned out to be the difference.