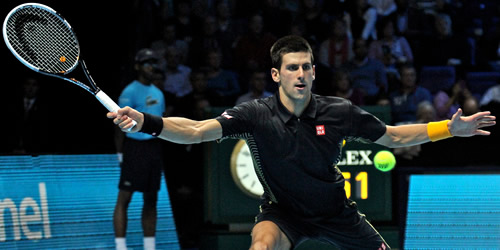 It was a day for the history books.

Semi-final Sunday at the World Tour Finals would welcome the one millionth fan through the doors and would see the third meeting in London in four months between Andy Murray and Roger Federer.

The former was aiming for his first final in this tournament and pursuing the first victory by a Briton at the end-of-year finale. The latter was hoping to win the WTFs for a third straight year and an unprecedented seventh time.

But before them, in an equally mouth-watering contest, came the other pair of warriors who had contested the medals during London 2012, both also keen to write their own lines in history.

Novak Djokovic won the title in 2008 but had not reached the final since. Juan Martin del Potro had not even taken part in the tournament since reaching the final in 2009: This was proving to be a significant return to the top table for the former world No4 after an absence of a year in 2010 and major wrist surgery.

In his characteristically laconic and modest style, del Potro summed up the day, with a smile, to perfection: “Now you have three big names in the semi-finals and one big guy.”

And big he is: The oft-dubbed ‘Tower of Tandil’ is 6ft 6in and 97 kilos. He is also newly back at No7 in the rankings after more than two years. But he had been getting just a little weary of repeated references to the reclamation of his ‘glory days’ of 2009 when he won the US Open:

“I don’t know what I have to do to answer differently. I won the bronze medal in the Olympics. In the photo, you can see Federer, Murray and me. Is now Murray in semis, Djokovic, Federer and me…I don’t care if I’m playing better or not than 2009.”

And he was right. If his performances this year, coming within a hair’s breadth of beating Federer at the Olympics—and beating Djokovic for the bronze medal—and subsequently beating Federer twice in consecutive matches this autumn did not prove his form, what would?

Well, beating Djokovic in London in this semi-final would probably do the trick. For despite beating the Serb at the Olympics, he had lost their two subsequent matches, first at the Cincinnati Masters and then at the US Open, both times in straight sets. And he had lost every other match, too, except through retirement by Djokovic during last year’s Davis Cup meeting.

Both men, though, had enjoyed an outstanding autumn. Djokovic won titles in Beijing and Shanghai while del Potro won back-to-back titles in Vienna and Basel. More significant, the Argentine’s were both indoor events, adding to Marseille in February and the final of Rotterdam—a 20-3 win-loss run. He was proving himself a master of the indoor arena—even beating Federer in both Basel and here in London on the Swiss man’s favourite surface.

In the opening games, there were winners and errors from both sides. Djokovic fended off deuce in the first game, del Potro faced two break points in the second after a couple of searing returns of serve from the Serb, but the infamous Argentine forehand and serve saved the day.

Djokovic certainly looked sharp, though, holding to love and taking a surprise lead on forehand winners, 4-1. Even his overheads were impressive.

However, the fourth game brought a first sign of the variety that the maturing del Potro has developed in his shot-making: the first touch shot of the match, a drop followed by a cross-court pass. It helped him to a convincing hold of serve, and the roar began—an indication that his super-hard forehand had arrived.

A careless smash into the net from Djokovic gave del Potro a first break point in the seventh game, but three deuces later and the Serb had survived.

Now, though, del Potro was in full flow, holding serve and then standing toe-to-toe with Djokovic from the baseline. His ground-strokes were near-perfect on both wings, and they earned two break points. He took the first and, minutes later, he had served out the set to love, 6-4.

The Argentine was playing at his peak, now, and the arena would not suppress gasps first at his power down the line, next his speed of reaction in returning the Djokovic serve, then his control of long, sliced backhand exchanges. This tennis earned three chances to break in the opening game but the Serb held—though not for long. In the third game, the del Potro juggernaut powered on, making barely an error and going 40-0. He broke at the second time of asking.

What he could not do was take his foot off the accelerator. In the fourth, he made a couple of errors and that gave Djokovic a toehold. Two break points grew to four break points as del Potro put another forehand into the net and Djokovic had the vital break back followed by a strong hold: 3-2.

Each dropped just a point on their next service games for 4-3, but there was the sense of a momentum shift. Djokovic was hitting with ever-greater precision to both base- and side-lines while del Potro made just a few more errors. Sure enough, in the eighth game, Djokovic broke as del Potro put a backhand into the net and he served for the set: 6-3.

Del Potro saw it the same: “Nole improved his game basically in the middle of the second set until the end of the match. He deserved to win today…in the end, he made the difference.”

The final set was done and dusted much more quickly, a half-hour, 6-2 blast from Djokovic. The Serb seemed incapable of mis-hitting the ball or of missing the lines. It was, in short, a masterclass in sharp, fast, clinical tennis. The Argentine looked slower to react and found it harder to time his winners: He managed to add only three to his match-total of 26 in the final set. Djokovic, though, piled them on. The two men had notched up the same number of winners by the end of the second set: By the end of the match, Djokovic had added 12 more.

The popular Argentine looked forward to a rest, watching some football instead of the rest of the tournament, but he showed this week that he is close to breaking back into that Grand Slam echelon of players—and that is one target for next year:

“These kind of matches give me illusions for the next season. I beat Roger yesterday. I was close to beat Nole today…I’m getting closer every day. Maybe could be my big challenge for next year, my big goal, trying to fight all Grand Slams with this group. You know, they winning all the Grand Slam: Novak, Federer, Rafa and now Murray. I would like to be part of those names in the Grand Slams.”

Djokovic, though, will be here for one more day, looking for a tour-leading 75th win for the year, a sixth 2012 title and a 34th career title. He is looking like the man to beat at the year-end climax—fresh, sharp and calm—which seems only right for the No1 player of the year.

And he can put his feet up for the evening while Federer and Murray fight it out late into the evening for the unenviable task of playing him in fewer than 24 hours’ time.