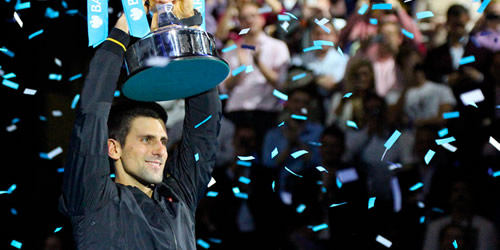 Novak Djokovic dedicated his victory over Roger Federer at the ATP World Tour Finals to his ill father.

And the Serb explained after the match how he had been motivated by his father Srdjan, who has been suffering with a chest infection.

“This was a title for him,” said Djokovic. “He’s much better now. At a certain stage it was very critical. We didn’t know what tomorrow brings, but now he’s much better and he’s recovering.

“He’s still in intensive care. I’m going to visit him and see how it goes and try to bring the trophy with me and at least make him smile.

“All in all, it was a fantastic year where I’ve had to face a lot of difficulties off the courts as well.

“Especially coming into this tournament, having my father fighting his own fight for health gave me extra strength that I wanted to play for him in a way, that’s one of the reasons I really gave it all every match, especially tonight.”

Djokovic added: “I actually feel more satisfied right now than last year, even though I had an incredible 2011.”