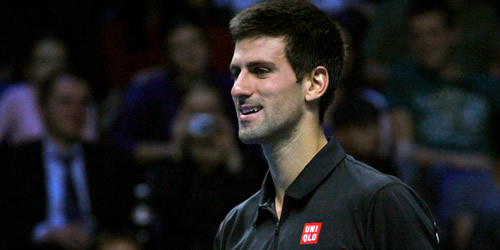 It’s opening night of the 2012 ATP World Tour Finals, and the honour of taking centre stage was handed to the newly-crowned world No1, Novak Djokovic.

With perfect timing, this very morning, the rankings had reverted to their pre-Wimbledon order, with Djokovic replacing Roger Federer at the top.

Since the summer grass of London, where the weary Serb failed to reach the finals of either Wimbledon or the Olympics, he had hit back strongly in the North American US Series, winning the Toronto Masters, then reaching the finals of Cincinnati and the US Open itself. And from there, he embarked on a wonderful Asian swing, too, to win in both Beijing and Shanghai.

Perhaps his first-match loss in Paris last week was, in that context, a blessing in disguise. The last thing Djokovic wanted, after coming close to burnout at last year’s World Tour Finals, was to return to London in anything other than fine form. Still he played things down:

“You can expect not always to be in your top form at this time of year…the long season can affect you… [But] I’m sure I will find the physical and mental strength to do well.”

In a difficult pool with one of his greatest rivals of the year, Andy Murray, Djokovic first faced the charismatic Frenchman, Jo-Wilfried Tsonga, the finalist here last year. On paper, it would warm the Serb up nicely as he had beaten Tsonga in their last six meetings, most recently in the final in Beijing.

Indeed it was almost three years since Tsonga got the upper hand, but back then, the balance was slightly different: Tsonga had won all four of their indoor meetings, and they had not played indoors again since 2009. His indoor credentials were also clear as he headed to London: Tsonga won in Metz and Stockholm and reaching the quarters in Shanghai.

So this had the makings of an all-guns-blazing match, and that was in part down to their styles. Both play athletic, all-court tennis, with Tsonga an attacking showman and Djokovic a combination of attack and remarkable defence—with the showman surfacing when the tennis is done.

The first set lived up to its billing. Djokovic opened serve, hit two outright winners, went 40-0 up and saw Tsonga take the next four points for a break point. A lucky net cord from Djokovic saved him and they stayed on even terms until the seventh, when again it was Tsonga’s attacking game—a blistering return of serve winner–that earned a break point. But he pushed a forehand wide and again the chance evaporated.

Perhaps it would be third time lucky: In the 11th game, once more Tsonga brought up break point with a breathtaking net attack, but this time Djokovic produced a winning serve and then outlasted Tsonga in a backhand sliced exchange.

It went to a tie-break, and the contrasting personalities shone through. Djokovic played the percentage game, getting every ball back, while Tsonga hit errors—a total of 16 in the first set—and it opened a fatal lead at 4-1 that Djokovic maintained to the end, 7-4. Tsonga’s attacking, exciting tennis, full of net rushing and deft volleys, had won the only break chances of the set, yet he lost it.

He lost his opening serve in the second set, too, and although Tsonga’s serving percentage rose from 59 to inside the 70s, the Djokovic serve was approaching 80 percent, and at 5-3 up, he had dropped only two points on serve in the set.

Djokovic had found his rhythm and was stringing together his network of backhands and forehands, criss-crossing the court, and ghosting in for the occasional touch volley put-away. His retrieval, too, caught Tsonga out, picking up a volley with a defensive lob so accurate that the Tsonga smash went into the net.

A measure of Djokovic’s increased confidence in the second set showed in his net play: He won 7 from 7 at the net, Tsonga—so enthusiastic in attack—managed just 4 from 8. He admitted afterwards that winning the first set, in parts against the play, boosted his confidence:

“To be quite honest, he was the better player through the first set. I faced many break points and I didn’t have any…I managed to stay mentally tough, and tried to fight my way through. I relaxed a bit more, stepped into the court, played more aggressive.”

In fact, it became clinical from the Serb, and the question was whether Tsonga could resist another break. The answer was one more over-struck volley from the Frenchman and a pumping celebration from Djokovic. The top seed took the set and match 6-3.

In the end, the superiority of Djokovic, demonstrated so eloquently in his five 2012 titles, five further finals his 70 match wins and his No1 ranking, was too much.

This did indeed appeared to warm the Serb up nicely for what follows: “My match against Andy is always a big challenge. He had a lot of successes in London, playing in his town, in front of his crowd, so big support…I’m sure we’re going to come up with some really good tennis.”

London will be holding its breath.