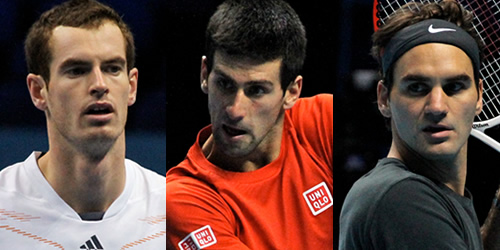 None of the men taking part in the season’s climax at The O2 this week have made any secret of their desire to win what they, and most others, consider to be one of the biggest trophies of the year after the Grand Slams.

Six-time champion Roger Federer, qualifying for the 11th time, won his 70th tour-level title here last year in his 100th final, and made it clear when he pulled out of the Paris Masters with ‘some niggles’ that he did not want “to take any risk before London.”

Andy Murray, qualifying for the fifth straight time, recognised: “There’s going to be pressure on me here to play well. The only thing I can guarantee is I’ll give 110 per cent on the court, fight as hard as I can till the end of all of the matches, see where that gets me. I hope it will get me a few wins.”

Novak Djokovic talked ahead of the Paris Masters of his pride in a good year “but it’s not over. There are two more very important tournaments to come…I just want to try to focus on those tournaments [to end] the year in the best possible way.”

And for these three in particular, it could mark an important card as one season ends and a new one begins. For while Djokovic has already been anointed the ATP year-end No1 by virtue of an unassailable points tally in 2012, the picture this year has been less clear cut than many in recent memory. Djokovic stressed that very point ahead of London competition:

“I believe that this year has been as equal as can be between four of us…which is different from previous years where you generally had one dominant player.

“We are trying to bring the sport to another level and it’s nice to see these rivalries are growing.”

This year, for example, they, along with Rafael Nadal, each won a Grand Slam and they divvied out eight of the nine Masters titles between them: Federer and Djokovic three apiece and Rafael Nadal two, with Murray reaching two finals.

And although Nadal has been out of the picture since Wimbledon, there has been nothing to separate the other three through the year: Murray and Djokovic stand at 3-3; Murray and Federer at 2-2; Federer and Djokovic are also tied at 2-2.

There are other measures by which to try and weigh the dominance of the three who now top the rankings. Djokovic and Federer, along with David Ferrer, have the most match-wins for the year. And apart from Ferrer, who just won his seventh title of 2012 in Paris, Djokovic and Federer also lead the rest in titles won this year: six for Federer and five for Djokovic.

So ranking points tell only part of the story and, in 2012, another factor also came into play: the Olympics.

Just four weeks after losing the Wimbledon final, Murray came back to London to take the gold medal and Federer the silver, while Djokovic lost out on a medal to Juan Martin del Potro.

Most now consider that Olympic medals are closing in on the Grand Slams in terms of value, status and the quality of competition required to win.

Murray has talked since taking gold of the pride and confidence it gave him—a platform to his subsequent win at the US Open. Federer made no secret of targeting a medal—any medal, it seemed—alongside reclaiming the Wimbledon title and No1 ranking.

And yet the points that came with this six-round, high-intensity, sought-after reward bore little relation to such status and standing.

Murray won 750 points, Federer 420—fewer than those for a Masters tournament let alone a Grand Slam or the World Tour Finals. Had things been weighted rather differently, the end-of-year race may not already have been won.

As far as Federer was concerned—and no player worth his salt would say any different—there was no debate to be had about the No1 player of the year.

“We know who that is, it’s Novak. I don’t think there should be any debate around that. You don’t get there by chance. Rankings show how you’ve played over a 365-day period.

“Right now it’s clear, and whatever happens I don’t think should take away from anybody…[though] we all miss Rafa because he obviously belongs in there and he also won a Grand Slam this year.”

So that will be an end of it. Except… It’s clear that, whatever the points say, there is barely a hair’s breadth between Djokovic, Federer and Murray ahead of the tournament that pits the top men against the top men in the ultimate face-off.

And weighed in the scale of the year’s tournaments, the World Tour Finals is up there with the Slams and the Olympics. So there is, in this most competitive of years of men’s tennis, some real justification in giving the nod to the one who finally comes out the victor in London.

If that person is not Djokovic, the ATP and the International Tennis Federation may therefore find themselves disagreeing over who is the best of the best in 2012. The ITF chooses a ‘World Champion’ based on performances not just on the main tour and the World Tour Finals but also other events such as Davis Cup, and Federer is the only one of the three to have played in that competition this year. It’s a small element, perhaps, but in a year of hair’s breadths, one that might also be significant.