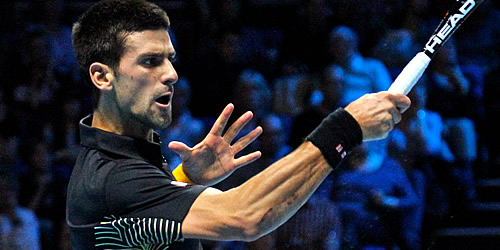 It would take an unexpected turn of events in the last phase of the Group A round-robins for World No1 Novak Djokovic to fail to qualify for the semi-final stages of this year’s World Tour Finals.

Indeed, it would require just one scenario from the 10 available for him to miss out.

But although he was playing in his sixth straight end-of-season tournament, he had only got beyond the round-robin stage twice—winning in 2008 and then losing to Roger Federer in the semis in 2010.

This year, so determined was he to keep enough in the tank to finish the year with a bang that he managed his schedule much more carefully. With the No1 ranking already in the bag, this was his final target in another high-level year.

To fail, Djokovic would have to lose to the biggest man in his pool, the No5 seed Tomas Berdych, in straight sets, and that looked unlikely: The Serb had beaten him in 10 of their 11 matches, losing only at Wimbledon in 2010. It was the Czech’s worst record against any of the ‘big four’.

But for those who saw their contest at this stage last year, on this same court, there was the prospect of a great match. Twelve months ago, Djokovic won in a third-set tie-break, coming back from 2-4 down in the third and saving a match point.

But the Djokovic that Berdych faced this year was a sharper and fresher man than 12 months ago. And it quickly became clear that the Serb had a spring in his step and that semi-final in his sharp-eyed view.

After an initial warm-up of two games, he began to open his shoulders on his ground strokes to go 40-0 up on the Berdych serve. The Czech pulled him back, but a vicious return of serve gave Djokovic another chance and he took it.

Berdych had a chance to level in the next game but a sequence of forehand errors threw it away. He would not have another chance in the set: Indeed Djokovic continued his clinical shot-making to break again before serving out the set, 6-2.

It had taken 34 minutes, but Djokovic had ensured qualification, and Berdych, with just three winners on the board, had to find something else to aid his own cause.

The second set began almost identically, Djokovic striking in the third game. But this time, Berdych did convert his break points in the next game as a wild Djokovic volley went wide. The Czech was playing himself into a better rhythm though still his winner-to-error ratio was just the wrong side of acceptable.

He survived a long threat to his serve in the fifth and the two men crept to what looked like a tie-break conclusion.

Berdych made a strong statement with a love service game to hold the 6-5 advantage—and they stood at identical points for the set: 29.

A communal sigh went around the arena—even the media room—as Berdych twice failed to earn a break point with down-the-line errors…it would have to be a tiebreak shoot-out.

Berdych continued to up the tempo, coming to the net three times in a row—more than in the entire match. He took a 3-0 lead, and then a 5-1 lead with his huge forehand. An ace took him to 6-3 and three set points.

However, the threatened Djokovic came back with a big serve, a big forehand and ace and, in the blink of an eye, had taken five straight points, the set and the match. He had also taken the top spot in his pool and a guaranteed place in the semis.

Who would join him there would have to wait not only for Group B to play tomorrow but also for the final match of Group A to play their night match.

“That’s it, you know. You cannot judge it by one match because every single one is different. As long as he’s going to be in the semi-final playing with whichever opponent, then it could go even better, or worse, even the same level. Every match is different.”

But the Serb’s game did look very good.