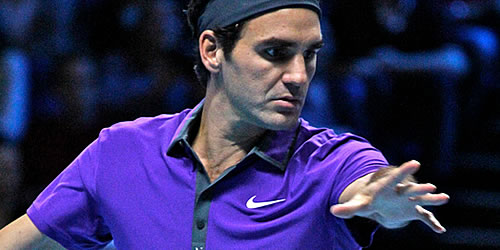 With one finalist in the frame, the second proved to be a still more intriguing match-up. Roger Federer and Andy Murray had played 18 times before but in 2012, theirs had become the most high-profile rivalry of the summer.

For with the world’s sporting spotlight falling on Wimbledon for a full six weeks—first for the most famous Grand Slam of the year and then for the Olympics—it was the same two men who contested both finals on the grass of Centre Court. And they took one title apiece.

The first of those matches, despite coming out the loser, filled Murray with confidence—“I’m getting closer”— and he went on to win the gold medal with consummate ease, in three straight sets, dropping just nine games. It was as though he had been beating Federer all his life. And to some degree, that was the case.

For while Federer had won their first match in Bangkok, with Murray still a teenager, the Briton won the next two, and eight more since to lead their head-to-head 10-8.

Until the grass this summer, every one of them had been on hard courts—and they had two wins apiece indoors. Murray, in short, had known how to beat Federer for a long time.

And Federer confirmed that after his patchy, hot-and-cold loss to Juan Martin del Potro the night before:

“I think [Murray’s] confidence just overall is higher today than it used to be just because of all his victories, all his performances day in, day out over many years now. It’s not just this year. People forget how consistent he’s actually been already since many years.

“To me, he was always probably going to be a player who needed just a bit more time than let’s say a Nadal or a Djokovic. He’s more in my category where he just needed more time to fill out your game.”

He went on: “Obviously the last six months have been amazing for him. I expect him to be extremely tough in the semis.”

In the opening game, that prediction immediately rang bells. Federer opened serve with two straight errors, one on each wing. He netted a forehand to concede two break points and repeated the shot to give away the first game.

Murray took a 2-0 lead with a hold of serve as Federer this time hit a backhand wide, and although the Swiss held the third game, his first serve was all over the place, much as it had been against del Potro the day before.

He was taken to deuce, held, and then looked in danger on his next serve, too, going 0-30 down. Now he threw in a net attack, made a crowd-pumping winner and roared “C’mon”. It sounded as though at least two-thirds of the arena roared along with him. Their champion was starting to come alive.

Murray kept the tempo as slow as possible between points, clearly focusing on keeping his own serve. Facing deuce, he staved off more Federer attacks by taking the net himself to conserve his 4-2 lead.

Federer’s first and only break point chance of the set came in the eighth, earned by the offensive and fleet-footed Swiss rushing the net to draw the error. He did it again to break back: The place erupted, and Federer held to take the lead for the first time in the match.

The set was finely balanced, both men finding a rhythm, reading and returning each other’s serves well—possibly the reason for so many missed first serves. Federer was managing just 56 per cent, Murray a worrying 49. Indeed, in terms of points won and lost there was also little to choose between them—one unforced error and three winners, both in Murray’s favour, summed up the set. Only right that it should be decided in a tie-break.

Again Murray took first blood as Federer shanked a backhand on his serve to go 1-3 down. The Swiss made up for it with another surge to the net to force Murray’s hand and he followed up with a winning serve and a typically Federesque swing volley, taken mid-air, to lead 5-4.

But when the Federer backhand began to outperform the Murray backhand, the writing was well and truly on the wall. A long baseline rally had Murray firing constantly to the backhand wing but the Swiss held his ground long enough to skip round for a forehand finish. It brought up set point on his serve and a big serve and forehand finished the job.

Murray needed to open the second set strongly or, as he said afterwards, Federer would take control: “Once he gets ahead, he’s incredibly hard to stop.

“He tends to play better and better when he gets up. I feel like I gave him that advantage at the beginning of the second set.”

That advantage was in the third game where, at 40-0 up, Murray played a couple of drop shots, and although he came off better in the first, Federer chased down the next to make a winner. With the gap closed to 40-30, and Murray missing his first serve time and again, Federer chipped and charged to draw another error, and on deuce, he outlasted Murray again in a backhand exchange. Murray called it “a regulation backhand into the net.” It was, in fact, a break of serve that he never recovered.

Federer dropped only two more points on serve—his only two of the set—on his way to a swifter half-hour conclusion, 6-2. For Murray had put his finger on it: Federer with the brakes off and feeling confident is a formidable player.

He broke Murray again in the seventh game with a crisp cross-court winner past an opponent who had barely reached the net.

And so Murray goes off for some rest—and a first Christmas at home in three years. He was downbeat, pragmatic, and looking forward:

“If you told me last year I’d be sitting in this position with the results I had last year, I would have agreed and signed up for that straightaway. I’m happy with the year and I’ll work really hard in December to get better.”

Federer, having now surpassed Murray’s coach, Ivan Lendl, with 41 match wins at this event, will now attempt to emulate Lendl as the only other man to win three year-end titles in a row.

“I love playing against Novak,” said Federer. “He’s had a great year. He’s had a great tournament so far. He played another good, tough match today against Juan Martin, who had him in the ropes. So credit to him to really come back and win.

“Facing off against Novak obviously is always special, especially here at the World Tour Finals.”

All that stands in his way is the man who usurped him from the No1 ranking before they came to London. Victory would, no doubt, be doubly sweet for Federer over Djokovic.