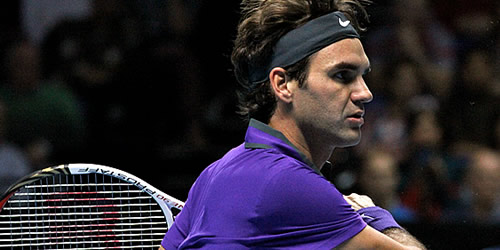 Roger Federer booked his spot in the semi-finals with victory Photo: Marianne Bevis

The task facing David Ferrer in his second match at the World Tour Finals was truly formidable. He had played Roger Federer 13 times across a decade of tennis, and he had yet to score a win.

That was not all. Only three times had he won a set—the last one back in May 2010—and never indoors. And he had managed to reach a tie-breaker only once—in Basel six years ago, and he lost it 16-14.

Asked about what it was that made Federer, more than any other player, difficult for him to beat, the answer came down to—well pretty much everything:

“I think he has a very good slice and very good serve. It’s very difficult for me to serve to Roger. Maybe with the other players I can receive better. And Roger, I can’t. Of course, he finishes the points at the net, and he has an amazing forehand, no? So maybe because the difference with him is because he’s better than me, no?”

Perhaps their head-to-head also weighted heavy in London because of their three previous meetings at the year-end tournament. In Shanghai, they played a best-of-five in 2007 in the final, and Ferrer had faced his nemesis in each of the last two years at the O2 as well.

Last year in the semis, he played a very competitive match, pushing Federer hard in the opening set with the kind of tactics he clearly went on to develop during 2012.

For this year, Ferrer had begun playing more offensively than ever, taking the ball early and on the rise from inside the baseline. It had paid off with a tour-leading seven titles in his best ever season and he now topped the ATP league in match-wins too.

What’s more, he came to London on the back of two straight indoor titles, including his first Masters in Paris.

He knew he would have to play like that against Federer this time, too:
“I think I will have to play very aggressive all the time for to have one chance to beat him.”

The Spaniard was true to his word right from the word go. A hush descended on the arena as Federer, winning the toss to serve first, went down 0-40 in the opening game. He took the next five points to survive, and Ferrer, perhaps shaken by the turn of events in that opening game, then offered up a break point in his opening game with a double fault, and he then hit a forehand long.

Federer’s 2-0 lead looked short-lived: He had to fight even harder to keep his advantage. The third game went to five deuces and Federer faced three break points in a game where he could not find a first serve—he made just one, an ace. And but for an intervention from the umpire on the first break point, calling a Ferrer winner onto the baseline out only for the replay to show it in, the story may have unfolded very differently.

Ferrer was angry, but for no more than two seconds, and knuckled back down, harrying Federer from inside his baseline to draw error after error. But the Swiss survived: the 3-0 scoreline flattered him, and it had taken 21 minutes to achieve—and between two such fast-playing men, that told an eloquent story.

Still Ferrer would not let up. He was showing just why his season was one of his most successful, the first time in his career that he had reached at least the quarters of all four Grand Slams, including the semis in Paris and New York.

He held his own serve to love and promptly attacked the Federer serve again, going 40-15 courtesy of a double fault from the Swiss—and this time he took his chance. They were back on serve.

Federer steadied the ship with his first love hold and had a chance to break in the eighth game, but hit a forehand out, and then double faulted to open the ninth game. Still his first serve would not find the mark, but he held—and suddenly found his touch.

Tennis can be a cruel mistress, and Federer a cruel opponent. In the blink of an eye, the Swiss reeled off four straight points at the crucial stage of the match, and there was no chance of a comeback. It gave Federer a break and the set, 6-4 after almost 49 minutes of seat-of-the-pants tennis.

The spirit of Ferrer lifted him again, despite failing to convert all but one of his eight break chances in the opener. He had two more opportunities in the very first game of the second, and that was despite four straight first serves from Federer. The Swiss forehand came to his rescue this time, and he held through two deuces—but then Ferrer went on to hold to love.

In fact there was only one more break point in a set that extended to an hour: That came in the fourth to Federer, but two big serves—another area of the Ferrer game that has improved with age—came to his rescue.

Now both were playing well, with Federer’s serve performing more reliably and his error count much reduced. But Ferrer lived with him, firing at the Federer backhand to open the court for a winner to the deuce court, and staying in both sliced and top-spin exchanges. He committed fewer errors, and made just as many points on his first serve as Federer—and that took him to a tiebreak showdown.

Once again, just as he had done in the first set, Federer summoned the best for the key moment. He took the tie-break by the smallest of margins, 7-5, and had won just three more points in the set than Ferrer, 42-39.

The huge respect between the two was clear in their handshake, and there seemed little regret in the Ferrer mind afterwards: “He’s the best in history. He can do everything with his game. I think he change his game, very well, no, whatever he want. He has a very good slice, very good serve when he needs. You know, he has a lot of weapons for to do pain in my game…I feel good with my game and with my performance with Roger.”

As for Federer, he had nothing but admiration for his fellow 30-something:

“Again today, I think Ferrer showed why he’s so tough to beat. He makes you hit the extra shot; He makes it physical. You know that mentally he’s not going to go anywhere. That’s why he has so much respect from his fellow competitors.

“I think this is really the time for him right now where all his hard work is starting to pay off for him…I think now in particular he can shine and prove to not only you guys, but also I think the other players, how tough he really is.”

The Swiss brought to an end the Spaniard’s 11-match run but is still just short of Ferrer’s 73-match-win total for the year—but not by much. Federer is up to 70, the fifth time in his career he has reached that figure, and is now on his own 12-match streak at the O2. The win also makes him the first to qualify for the semis this year.

He will surely be very grateful he could pull out the second-set tie-break rather than face a third set against this demanding Spaniard. Now Federer can sit back and watch the rest fight it out.

Anzhi 1 Liverpool 0: We were made to pay for one mistake, admits Rodgers