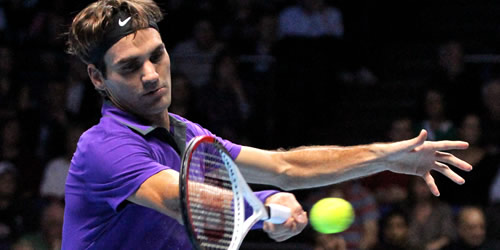 If No1 Novak Djokovic took centre stage on day one, it was possibly the king of the ATP World Tour Finals, world No2 Roger Federer, who grabbed the limelight on day two—that is if the reaction from the fans at the O2 is anything to go by.

Even when he’s not on court, he has managed to raise cheers every time he appears on the continuous loops of video that fill each gap before and between matches in the giant 18,000 capacity arena.

But when he is on court, there is no doubt who the Fans’ Favourite is. Seas of red, filled by Swiss flags and messages of support, line the court during practice and flood the flanks of Centre Court during matches.

Perhaps it is one by-product of his endurance, durability and longevity—not just in years played but in the level played. Perhaps it is the nature of his game, a balletic athleticism channelled into all-court shot-making.

But one of the chief reasons the fans—and pundits, too—come here in their droves is because he has owned London like no other.

Here in 2012 alone, he won his first Grand Slam in two-and-a-half years and his first Wimbledon since 2009 to stretch his record to 17 Majors—and his seventh on the London’s grass. Less than a month later, he came back to win silver in the Olympics on the same court. And elsewhere, he took five other titles and returned to No1 to top of the rankings for a record total of 302 weeks.

This, Federer’s first match of the 2012 World Tour Finals, marked his 11th appearance in a tournament he has won a record six times, the first in 2003 and the most recent last year. No wonder he had dressed the part—in royal purple.

In this opening match at the O2, he was on the verge of another record if he won his opening match against the No8 seed Janko Tipsarevic. It would take him to 40 wins at the tour finale, one ahead of Ivan Lendl—who happens to be working here with one of Federer’s chief rivals, Andy Murray.

And the omens what not exactly on the Serb’s side. Tipsarevic had not managed a win against the Swiss in all five previous matches and, apart from their meeting at the Australian Open almost five years ago, he had not won a set either.

The Tipsarevic virtue is his high level of consistency, especially since hitting the top-10 a year ago. In 2012, he reached three finals, winning in Stuttgart, and reached the quarters or better in 14 tournaments, including the US Open for the first time. As the alternate here last year, he took Murray’s place for two matches and achieved his first win over the top-ranked Djokovic.

But consistency was never going to be enough against Federer at this tournament, on this surface—and with this crowd.

The chanting began almost before the match, with one band of followers roaring “Roger” on one side of the court and the other answering “Federer” on the opposite side. It was an intimidating bear-pit for Tipsarevic to enter first, and was equally intimidating to face one of the best serves in tennis first.

It showed. Federer opened with a love service hold and straight away won break points against serve, taking the second with a backhand cross-court winner.

Federer rushed to a 40-0 lead on the next game too, before a net-cord gifted a point to Tipsarevic and then Federer made his only double fault of the match. In a moment, the mistake was remedied with a second-serve winner and the Swiss was 3-0 up.

The closest Tipsarevic came to a break point was in the seventh game, when he correctly challenge a Federer serve. The Serb reached deuce, but the attacking Swiss rushed the net to win one point and produced a second-serve ace for the game. His next service game was quicker: four points, two of them aces, and the set was his 6-3.

Federer had dropped only one point on his first serve in the first set, and hit 12 winners to Tipsarevic’s six. And the second would be more of the same. This time the Serb had the advantage of serving first, and he held his first game, but his second was a different matter. He faced and survived two break points in the face of some vicious forehand hitting from Federer, but succumbed to a third.

Quickly broken, Tipsarevic was soon serving again after a love hold from the Swiss. He was clearly under pressure, and even more so after a gesture of sportsmanship that went on to cost him another break. A Federer winner was called long but the Serb shook his head. The Swiss challenged, they played the point again, and Federer took the game to deuce. A cross-court touch volley brought up break point, and Federer converted at the second attempt.

It went downhill from there for the Serb: He won not another game as Federer broke him again for a 6-1 victory.When it comes to advancing beyond the round robin stages, count-back on games can make all the difference: This was therefore a handy way to start.

So how was Federer feeling after dropping out of the Paris Masters with some niggles?
“I’m happy that I feel fine just in time. I still had some little things I had to work through the last couple of days. Really since yesterday I fell fine. So obviously it was good for me to start on Tuesday…I feel like I’m striking the ball well after today.”

The stats supported his confidence: 24 winners to 15 errors, just one point dropped on his first serve, and no break points faced.

The next test will probably be harder, and he intends to do some homework beforehand:
“I’ll try to watch tonight’s match [between Juan Martin del Potro and David Ferrer] and get some info on how both are playing, how David’s pulled up after his great win in Paris, how Juan Martin is playing after Basel and Paris. Interesting matchup tonight, no doubt.”

He’s not wrong. The prospect of an eighth meeting this year with the Argentine, after Federer suffered a first loss in Basel last month since they met in this very place three years ago, is one to make the mouth water.