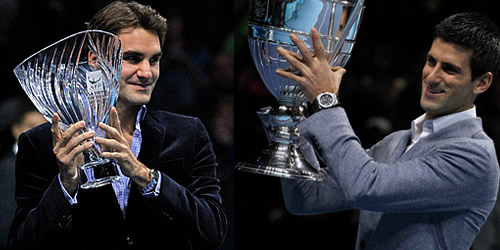 The main arena at the O2 is well used to the sartorial superiority of the two top-ranked men in tennis. Roger Federer and Novak Djokovic, favourites for the 2012 World Tour Finals title, both know how to turn on the style and both have gone for smart, deep hues and sharp outlines as they pursue the last titles of the year.

But both also illustrated their off-court elegance when summoned to Centre Court to receive possibly the most prestigious awards in the tennis calendar. Between them, they won four of the ATP World Tour Awards, and each followed the other’s afternoon match to pick up their trophies in front of a packed house.

On Tuesday, minutes after Federer overwhelmed Janko Tipsarevic, Djokovic appeared, nattily turned out in light grey, to collect one of the biggest trophies—both metaphorically and literally—in his sport. The silver cup for ATP World Tour No1 is vast, shiny and impressive, and Djokovic lifted it for the second consecutive year.

ATP Executive Chairman and President Brad Drewett, who presented the award, told the crowd: “Finishing the year as No1 on the ATP World Tour must go down as one of the toughest challenges in all sports. Since the rankings began 40 years ago, only 16 players can lay claim to this feat. It’s the greatest test of skill, hard work and physical and mental endurance that our sport has to offer.”

Djokovic, as articulate with a microphone as any player on tour, responded: “It is an incredibly satisfying feeling to win this trophy for a second time. I hope to be able to fight for this title next year.”

Tipsarevic, asked about his compatriot shortly after the award ceremony, thought it was highly likely that Djokovic would not only contest but win the accolade again next year:

“To be honest, I was expecting him to stay No1 because just talking to this guy, in my opinion, on his mind is only one thing: to be the best and the No1 in the world for ever and ever and ever. So I wouldn’t be surprised if he stays at No1 all throughout next year and win whatever goal he has in his mind…With him, nothing surprises me.”

Djokovic claimed even greater satisfaction for the second award, the Arthur Ashe Humanitarian of the Year award, which recognised his contributions through the Novak Djokovic Foundation and his role as a UNICEF ambassador. I asked him what this award in particular meant:

“To be honest, it’s even a bigger award to me personally than any other because it’s a respect to what my foundation has done this year and all these years, so this is something that makes all the people working in our foundation very happy and motivates us all to do even more.”

The following afternoon, after Djokovic took a dramatic victory in a tight third set from friend and rival Andy Murray, it was Federer’s turn to take to court in out-of-competition garb. That is not to say he let his standards slip: The look was elegant and sharp, a midnight-blue needlecord jacket over navy jeans.

He was picking up the Fans’ Favourite award for a 10th straight year and the Stefan Edberg Sportsmanship Award for the eighth time and the second year in a row.

He paid tribute to the constancy of his fans:

“It’s incredible. I got this award for the first time in 2003, the year I won Wimbledon, and every year since. It keeps me motivated and inspires me. It makes travelling so much easier. I hope I’ll see you supporting tennis and me in the future. I couldn’t thank you enough.”

He stressed, too, how important the recognition of his peers was.

“Stefan Edberg was my idol growing up. He was a great inspiration for me. I always tried to play according to the rules and be respectful to my fellow competitors.

“A lot of other players totally deserve this award. [That it’s voted for by fellow players] makes it extra special. We have great matches all over the world and the recognition is a great feeling. We’re trying to inspire the next generation.”

Federer next plays David Ferrer, and another straight-sets win would assure his place in the semifinals. The Swiss has won all 13 of their previous meetings, 10 of them in straight sets.

Djokovic will have to wait for the third and final round robin matches of Group A, despite having two wins on the board already, after Tomas Berdych beat Jo-Wilfried Tsonga in three sets to record his 60th match-win of the season.

Berdych will play Djokovic on Friday afternoon, while Tsonga, sitting at the bottom of the group with two losses, will play Murray on Friday evening.