Brazilian Grand Prix 2012: We have nothing to lose, declares Alonso 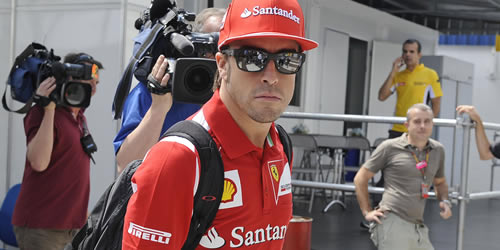 Fernando Alonso and Sebastian Vettel will battle for the title in Brazil Photo: Ferrari

Fernando Alonso insists he is approaching this weekend’s decisive Brazilian Grand Prix with a nothing-to-lose mentality as the Ferrari driver looks to pip Sebastian Vettel to the drivers’ championship title.

Alonso arrives at Interlagos 13 points behind Red Bull’s double world champion, with the German able to wrap up his third successive crown with anything better than a fifth-place finish on Sunday.

But the Spaniard believes the pressure is off him and that will suit Ferrari.

“In Formula 1 there is always pressure,” Alonso said. “But definitely we have less than in some other occasions and probably less than if we were leading the championship. We have nothing really to lose.

“We are arriving in second position with five or six qualifyings dominated by Red Bull when we were [qualifying] around positions seventh and eighth.

“To recover 13 points sounds like a very difficult achievement and I think if everything goes normally we should finish second and if something happens we will win the championship.

“It’s not in our hands so the pressure is much less.”