Brazilian Grand Prix 2012: Lewis Hamilton will start from the front of the grid alongside Jenson Button at last race of the season 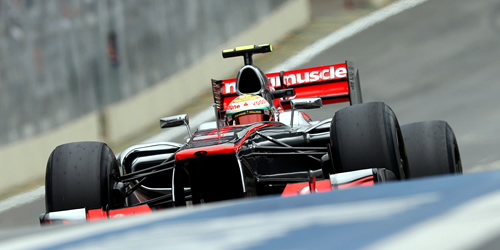 Lewis Hamilton seized his 26th career pole position to ensure he will start his final race for McLaren from the front of the grid at the Brazilian Grand Prix.

Team-mate Jenson Button will start alongside him, making it the 62nd front-row lock-out for McLaren – a new all-time record.

Having won last week’s United States Grand Prix, Hamilton out-drove the rest of the field with a lap of 1 minute 12.458 seconds, finishing one tenth in front of his fellow British driver.

It was a scrappy qualifying session from championship contenders Sebastian Vettel (fourth) and Fernando Alonso (eighth) as both were out-qualified by their team-mates.

“It’s been a good weekend so far,” said Hamilton. “I’m grateful to be able to put the car on the front row and to be able to have my last one-two qualifying with Jenson.”

“Just a fantastic job by the team. I’m so grateful for all the opportunities they have given me. I hope we can turn it into something really positive tomorrow.”

“I think the weather is going to be tricky tomorrow so it’s definitely going to make it more of a lottery.”

“I think we’ve put ourselves in a really good position and we’re just going to do the best job we can from there.”

“We’ll work together as a team and this is the best we have been for some time so we’ll make sure we do absolutely everything to get the top result.”

The Spaniard, who has to finish on the podium tomorrow to have any chance of picking up his third driver’s championship, will start behind Williams’ Pastor Maldonado and Force India’s Nico Hulkenberg in eighth.

Ferrari will be relying on fifth-placed Massa to help his team-mate compete for the title tomorrow. 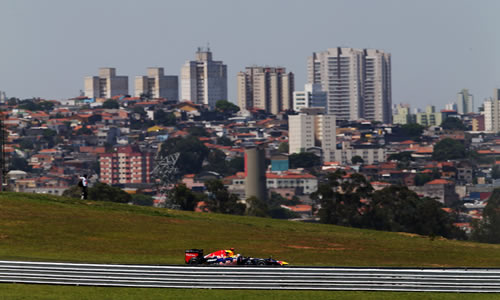 Sebastian Vettel will win his third straight world title with anything better than a fifth-place finish at Interlagos, but will start from fourth on the grid (Photo: Getty Images/Red Bull Racing)

Both Massa and Alonso had a nervy Q2 as the two Ferraris struggled to show pace and only just scrapped through into the top 10 shoot-off.

After 21 years of racing, Michael Schumacher will begin his last race as an F1 driver from 14th position on the grid.

For the first time in his career, Romain Grosjean was knocked out in Q1. The Frenchman will start from 18th position after clipping the back of Pedro de la Rosa’s HRT on the final corner and damaging his front wing.

Pastor Maldonado may be given a penalty after he drove through the red light at the entry to the pit lane. An FIA official was pointing towards the weigh bride area, but the Venezuelan just drove straight on.

As it stands, Vettel is leading the drivers’ championship by 13 points. Alonso has to finish on the podium to stand any chance of beating the German and that could be tricky from eighth position.

Vettel will win his third straight world crown with anything better than a fifth-place finish at Interlagos.

However, the Spaniard has shown some impressive race driving all season and it is bound to go to the end of the race.

With two very fast McLarens on the front of the grid and changing climate conditions, anything could happen.

The season will no doubt end in high drama tomorrow at the final Grand Prix of the year.