Brazilian Grand Prix 2012: This is our biggest achievement, says Horner 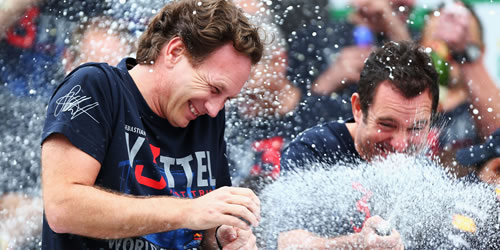 The German was forced to recover from a first-lap spin and made his way back up the field to finish sixth in a tense finale to a dramatic season.

“This is by far the biggest achievement as a team we have ever had,” team principal Horner said.

“We were restrained last week [when we won the constructors’ in the USA] because we knew the job was only half done and it’s been a tough week but everybody has kept their focus and held their nerve. With what we were faced with today, the race could not have been more stressful.

“I’m sure several of us hit V-max on the pit wall today, but it’s not just about today, it’s about a season as a whole with 20 races, the way this championship has ebbed and flowed and we fought our way back in to it.

“Sebastian in particular never gave up and at times was the quickest car on the circuit. He really wanted this championship, showed great determination and it doesn’t ever get any easier.”

Horner also reserved praise for Ferrari’s Alonso for pushing Vettel until the very end in the race for the drivers’ crown.

“I have to congratulate Fernando Alonso who has driven fantastically this year; he’s been a formidable opponent,” he added.

“He’s pushed us all the way and at one stage it looked like we were out of the championship. But we fought back and delivered what we needed to at the end here in what couldn’t have been a more mixed and stressful race.”

Brazilian Grand Prix 2012: It was one of my toughest races – Jenson Button

Andy Robinson steps down as Scotland coach after Tonga loss