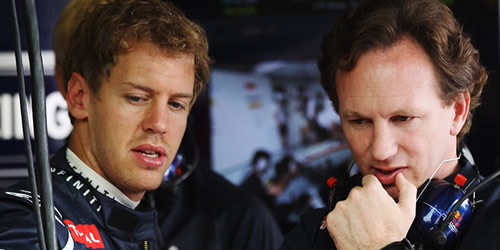 Christian Horner insists Red Bull will approach next weekend’s title-deciding Brazilian Grand Prix with the same mentality that they have taken into the rest of this year’s races.

Red Bull’s Sebastian Vettel can secure his third straight world title with anything better than a fifth-place finish at Interlagos after the German extended his lead at the top of the standings to 13 points at the US Grand Prix.

Vettel’s second-place finish behind Lewis Hamilton at the Circuit of the Americas wrapped up the constructors’ title for Red Bull – and Horner says the Milton Keynes-based outfit will go all out in Brazil to make it another championship double this year.

“We’ve just got to approach the next race like we have the previous 19,” Horner said.

“We’ve just got to go there, attack the weekend, get the best out of ourselves, the car, the drivers, strategy, reliability, and anything can happen as we’ve seen this season.

“But it’s good to be going there with a lead and we’ll just go there determined to try and close the job off.”

With rain predicted for this weekend’s race, Vettel’s title rival Fernando Alonso declared that “anything can happen” – but Horner is hopeful Red Bull can perform at Interlagos, despite the forecast.

He added: “We saw on Friday that there was very little time between Lewis and Sebastian; it was less than a tenth on Friday and looked like the same [in the race]. It was a good race, I think it was a great race for the fans, it was close throughout. Brazil is a different venue, maybe different weather there, who knows? But hopefully we can have a strong weekend.”