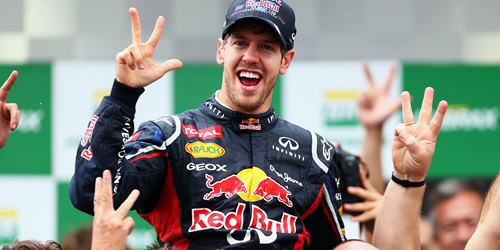 Sebastian Vettel admitted it was “unbelievable” to be told that he had won a third straight world championship title after the Red Bull driver did just enough to seize the crown at Sunday’s Brazilian Grand Prix.

The German was forced to recover from a first-lap spin and made his way back up the field to finish sixth, but did not receive confirmation that he had won the title until he crossed the line.

“I think that everything that could go wrong went wrong and as a matter of a fact we always kept believing instead of getting angry and frustrated about the situation.

“Imagine yourself; you are the wrong way around at turn four; I had a lot of cars coming and I was in the wrong way. Then I went off the brakes because everyone is going in this direction so to join them I tried to roll downhill and avoid cars driving backwards!

“We kept the car damage to a limit, but obviously we could see in the dry conditions later on that the pace wasn’t there and I was really slow down the straights which made it very easy for others to pass us and very difficult for us to pass someone.

“Then we lost radio, did the pit stop probably at the wrong time because I put on a set of drys and a lap later it started to rain, I came in and the inters weren’t ready because I had no radio communication – the team couldn’t hear me.

“Then we caught back up in the intermediate conditions. Fortunately the pace was there because you can make up the lack of car pace that you have by driving a different line and trying to do something different to others.

“Then to limp home under the safety car, at that moment I didn’t know if it was enough. I was told a couple of laps before it should be fine but then I don’t know … then to get told was unbelievable. Unfortunately the guys couldn’t hear my answer because the radio was broken!”

When asked what the third straight title meant to him, Vettel replied: “Correct me if I’m wrong but there are only two others who have done that before.

“You need to be in the right place at the right time, but I also believe that you can create your own luck and work for what is coming up. One of the great things about Formula One is – not only yourself – but you can compare your time, your era as you may say to 10, 20, 30, 40 years ago.