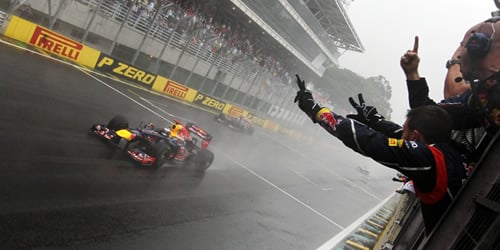 “It’s just an hour ago probably and obviously it will take time [for the achievement to sink in],” said Vettel.

“It’s unbelievable and very difficult to find the words. It’s been a very, very tough season on track and off track.

“It was the toughest one but obviously we tried to always be tough, strong, fight, hang in there, and today they threw everything at us and we never gave up.

“I’m very proud of that and obviously it was an incredibly difficult race, but to come out of it and win the championship here is unbelievable.

“I think it was the most difficult race we have faced in terms of timing. Our stop wasn’t great and there are so many examples – the radio didn’t work, we got spun round on the first lap.” 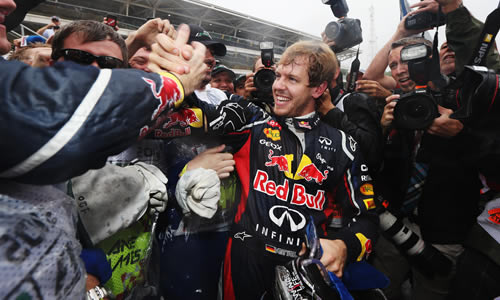 Vettel’s race began with a very shaky start as he spun in a Turn Four collision with Bruno Senna.

The German driver found himself at the back of the grid with bodywork damage and a crease in the exhaust system but it was not enough to destroy his race weekend.

It was also a miserable end of the season for Williams as both Senna and Pastor Maldonado suffered early exits at Interlagos, with both cars out on lap one.

Ferrari were on a mission in Sao Paolo and displayed some spectacular teamwork between their two drivers.

Having blasted off the line, Massa proved his worth as a team-mate as he did everything possible to help Alonso.

The Spaniard shot off the track twice in the early stages as rain peppered the circuit, leaving him with no choice but to use the intermediate tyres.

The tricky conditions meant it was constant change on the circuit.

Lotus’ Romain Grosjean skated off the track on lap seven, ending his tumultuous F1 season in the barrier.

The McLaren boys were having a fight between themselves at the front, with Button snatching the front spot from Lewis Hamilton.

A move to the intermediate tyres for Hamilton saw him lose second position to Force India’s Nico Hulkenberg.

Meanwhile, Mercedes’ Nico Rosberg became a casualty of the first lap debris as he picked up a puncture on lap 21.

In a bizarre turn of events, Nico Hulkenberg found himself at the front of the pack on lap 19, showing superb pace in his Force India as he dived past Button.

Having decided to stay on the slick tyres, Hulkenberg and Button had a 47-second advantage over the field.

But a radio call from Alonso seemed to call out the safety car as the Spaniard complained of debris on the track.

Despite retaining first place for the six lap safety car period, a greasy track saw Hulkenberg spin on the white lane, allowing Hamilton to sneak past.

He may have begun on pole but Hamilton did not finish his McLaren career with victory as a desperate move from Hulkenberg terminated his race.

As both were overtaking backmarkers, Hulkenberg drove his Force India up the edge into Turn One, slipped on the wet track and collided straight into Hamilton’s McLaren.

Hulkenberg was awarded a drive-through penalty and ultimately finished in fifth, but the British driver headed back to the garage to receive a standing ovation from his team of 14 years.

Meanwhile, Vettel caused controversy as he seemingly passed the Sauber of Kamui Kobayashi under yellow flags.

The pass was only spotted by the commentators and no action was taken by the stewards.

With a long pit stop for Vettel, it seemed that luck might swing towards Alonso as he moved past his team-mate Massa into second position.

But Vettel proved unstoppable in the Brazilian gloom, finishing the race in sixth position to win him his third consecutive world championship.

The season ended under double yellow flags as Force India driver Nico Rosberg spun on the soggy track, crashing on lap 70 of 71.

“First of all I want to congratulate the whole team,” said race winner Button.

“This is the perfect way to end the season. We have had ups and downs and to end on a high bodes well for 2013.”