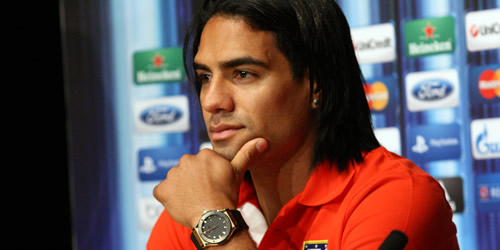 Radamel Falcao has been heavily linked with a move to England Photo: The Sport Review

David Luiz has urged Radamel Falcao to move to Chelsea as speculation over the striker’s future continues to mount.

Falcao was Chelsea’s chief tormentor as Atletico Madrid ran out 4-1 winners in the Uefa Super Cup back in August, with the striker netting a memorable hat-trick against Roberto Di Matteo’s men in Monaco.

The 26-year-old forward, who has already scored 10 league goals this term, has been heavily linked with a January move to the Premier League, with Manchester City and Manchester United also reportedly interested in recruiting the front-man.

And Chelsea defender Luiz admits he would love Falcao to join him at Stamford Bridge.

“I’m happy when there are great names attached to Chelsea. He’s a great player. It would be a good choice for Falcao to come to Chelsea,” said Luiz after Brazil’s 1-1 draw with Colombia on Wednesday.

“All of the players would be happy because Falcao is a great player. It’s particularly hard to stop him.”

Falcao earlier this week admitted he is “dreaming” about a move to another league but insists he remains focused on the task at hand at Atletico.

“The chance of playing in another league and for another club will come,” Falcao told Radio Caracol. “I keep dreaming. I know that in time I would like to go to a different team. But I have three more years left on my contract with Atletico.

“The dream is always there. The Premier League is an interesting league but I have a few years left on my contract with Atletico and I’m just focusing on Atletico.”