Davis Cup 2012: Marianne Bevis looks ahead to this weekend's final between Spain and Czech Republic 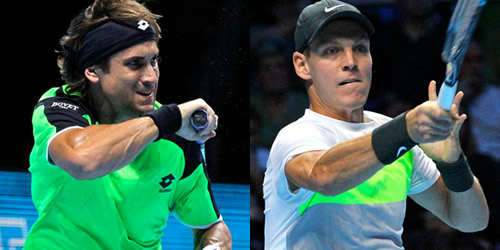 David Ferrer and Tomas Berdych will be in action for Spain and Czech Republic Photo: Marianne Bevis

The 100th final of the Davis Cup between David Ferrer’s Spain and Tomas Berdych’s Czech Republic has the makings of a very special occasion indeed.

From its modest beginnings in 1900 as a two-nation contest between the USA and Great Britain, the tournament has become the world’s biggest annual international team competition, embracing 123 countries.

Now, in one of the finest sporting years of this millennium, the two best teams of 2012 have battled through three rounds of the World Group to compete for one of the most lavish trophies in sport.

On the other is the Czech Republic which, as Czechoslovakia, won the Cup in 1980. It has now reached its second final in its last four appearances. And as luck would have it, that last final in 2009 was against the very same opponent—though the current squad will want to banish their 5-0 white-wash from Spain from their collective memories.

This time, the Czech Republic has much to be optimistic about. First, Spain’s most formidable player, Rafael Nadal, is missing with injury. Second, the Czechs have the home crowd and the home venue, on a much more favourable indoor hard court than the indoor clay on which they floundered in Spain.

And if that was not enough, the home team is revisiting the venue and the city where, just two weeks ago, the Czech Fed Cup team beat Serbia to win the women’s trophy for the second straight year. Add in a Hopman Cup victory at the start of the year, and the Czech Republic could be the first nation to win all three team events in the same year.

But despite all these advantages—and Spain’s undoubted reputation on clay—the visiting team’s chances should not be underestimated. Their new ‘leading man’ David Ferrer, stepping out of Nadal’s shadow and into the deserved limelight, has more than shown his metal on hard courts this year. He reached the semis of the US Open, beat big-hitting Juan Martin del Potro at the World Tour Finals last week and, amongst his tour-leading seven titles in 2012, his most recent two were won indoors in Valencia and the Paris Masters.

Thirty-year-old Ferrer opens against fellow veteran, Radek Stepanek, who will be 34 later this month. Despite the Czech’s preference for fast, hard courts to show off his serve-and-volley skills, the Spaniard has won their last three matches and all their hard-court matches.

Theirs is the opening match of the tie, and provides a little special drama: They contested a five-set thriller in the 2009 final, with Ferrer taking the rubber, 8-6 in the final set. Ferrer commented: “It was a very emotional match…That was my second Davis Cup [title] and first one at home in Spain, and one of the best moments of my career.”

The key Czech man, ranked just one place below Ferrer at No6, is Tomas Berdych. Like the Spaniard, he comes to the tie direct from the World Tour Finals and, prior to that, he won the indoor title in Stockholm. His other title also came indoors in Montpellier at the start of 2012.

Having lost in straight sets to Nadal in Barcelona back in 2009, he feels much more optimistic about this year’s tie.

“The final in Barcelona, we were in completely a different position and all that was against us. [It’s] now going to be on our side…We will do everything we possibly can to get those three points.”

In the end, though, the title could come down to an intriguing doubles rubber. The Spanish duo of Marcel Granollers and Marc Lopez, who only started playing together regularly at the start of the year, come fresh from victory at the World Tour Finals, having beaten the Bryan brothers along the way.

And although the Czech doubles team is slated as Ivo Minar and Lukas Rosol—the latter being the man who beat Nadal in five sets at Wimbledon—that may change to a Stepanek-Berdych pairing. And that duo has lost only one Davis Cup rubber—though it was against Spain in 2009.

Tomas Berdych, ATP ranking No6
Titles this year: Montpellier and Stockholm
H2H v Ferrer: 3-5 (1-2 on hard courts, that win being in their most recent match, at WTFs 2011)
H2H v Almagro: 8-3 (played five times this year, 4-1, the loss being Indian Wells)
Comes into final with a perfect 8-0 Davis Cup record in 2012, and expressed delight that previous Czech DC winner, Ivan Lendl, is in attendance.

Radek Stepanek, ATP ranking No37 (No4 doubles)
Titles this year: Three in doubles with Leander Paes, including Australian Open
H2H v Ferrer: 3-6 (though Stepanek has won on clay, grass and indoors)
H2H v Almagro: 2-1 (won indoor Paris Masters 2010 but lost in US Open this year)
His serve-and-volley game thrives especially on fast courts and, with Berdych, has 11-1 win-loss record in Davis Cup doubles.

David Ferrer, ATP ranking No5
Titles this year: Auckland, Buenos Aires, Acapulco, ’s-Hertogenbosch, Bastad, Valencia, Paris Masters
H2H v Stepanek: 6-3 (including last three meetings plus all three on hard-courts)
H2H v Berdych: 5-3 (2-1 on hard courts and won four of last five matches)
Has won 21 of 25 Davis Cup rubbers, all in singles, and has improved serve and net game in last year to reach semis at both French and US Opens.

Nicolas Almagro, ATP ranking No11
Titles this year: Sao Paulo and Nice
H2H v Stepanek: 1-2 (but win coming in most recent match at US Open this year)
H2H v Berdych: 3-8 (most recent win this year on Indian Wells’ hard courts but lost three times since)
First appearance in Davis Cup final, and has won all five singles rubbers played this year, but all on his favourite clay surface (though reached last 16 at both Australian and US Open this year).