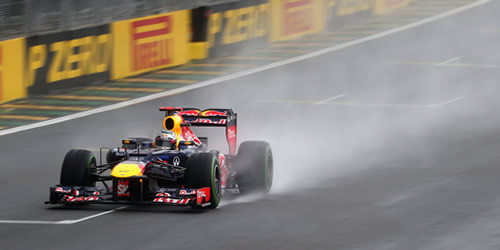 The now three-time world champion Sebastian Vettel produced an amazing recovery drive on Sunday and joins an elite club of triple champions. After being hit heavily by Bruno Senna’s Williams on the first lap, the Red Bull driver quashed any lingering doubts over his overtaking ability as he carved his way back through the field. The safety car period undoubtedly helped, but with a shattered car he still managed to overtake half of the field in the first few laps. Whilst we have only seen his 2011 dominance in small doses this year – he must want to race in Asia every weekend – there can be no denying the German is well on the way to legendary status like his departing countryman, Michael Schumacher.

Following the disastrous qualifying session in Melbourne way back in March, it seemed impossible for Fernando Alonso to be heading into the final race of the season with a chance of winning a third title. Despite the unresponsive and fundamentally slow car, Alonso still managed to pick up points in all of the early races, including a memorable victory in wet conditions in Malaysia. His remarkably consistent driving, combined with improvements to the car, saw him score points in every race he finished, and climb on to the podium 13 times – more than any other driver. The Spaniard did what all great drivers can – dragged performances from a car that didn’t deserve it – and for these reasons he surely deserves a third world title in the next couple of years.

Hulkenberg will be a race winner

The emergence of Nico Hulkenberg as a potential race winner only came to light in Brazil but his improvement over the season has been clear to see. A once close inter-team battle with Paul di Resta was won convincingly in the end by the German, who scored points in five of the last six rounds. His lack of fear at overtaking the big guns was evident at Interlagos and he and Jenson Button were in a league of their own in changeable conditions until the safety car was deployed. It remains to be seen whether Sauber can jump the field in the early races of 2013 as they did this year but with the right equipment under his feet, Hulkenberg could yet provide the Swiss marque with their first victory under their own name before the inevitable move to one of the big teams in the next couple of years.

A few months ago, Felipe Massa looked like a sitting duck waiting to be fired at the end of the season following abject performances in the first half of the year. Clearly struggling with an awkward machine, the Brazilian was unable to get anywhere near team-mate Alonso, and there was even talk of him being replaced mid-season by young pretenders such as Sergio Perez and Hulkenberg. However, his performances in the second half of the championship have seen the Ferrari man roll back the years, with performances in Korea and Brazil in particular reminiscent of his title challenging year in 2008. Whilst it is unlikely Massa will ever trump Alonso over a season, he has shown himself to be a more than capable deputy.

Schumacher may not be leaving alone

It was well-documented that Schumacher was retiring from F1 for a second time after Interlagos following a disappointing return from his three years at Mercedes. However, Schumacher may not be alone in never setting foot on the grid again. Highly-rated and talented drivers up and down the pitlane face an uncertain future. Kamui Kobayashi is somehow without a drive for next year. Despite scoring his first podium finish and doubling his points tally from last year, Sauber have replaced him with Mexican rookie Esteban Gutierrez. Similarly, Heikki Kovalainen’s position at Caterham may be under threat. The team finishing 10th in the championship (thanks to Vitaly Petrov’s overtake of 2013 Caterham driver Charles Pic) may help the Finn stay onboard. Bruno Senna is another driver with question marks over his future – replaced at Williams by Valtteri Bottas and facing a return to the back end of the grid at best.