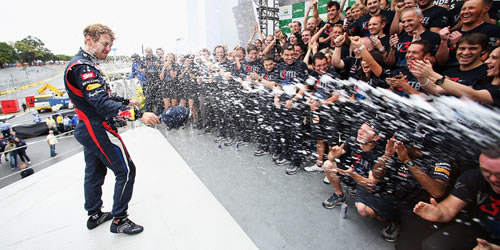 Ferrari considers the controversy over Sebastian Vettel’s controversial pass in the Brazilian Grand Prix to be “closed”.

The Italian team wrote to the FIA to seek clarification over the manoeuvre after video footage emerged appearing to show the German overtaking illegally during the Brazilian Grand Prix.

The governing body responded by saying that Red Bull have no case to answer as it was confirmed that a green flag had been shown, which meant Vettel was free to overtake Jean-Eric Vergne’s Toro Rosso.

A Ferrari statement released on Friday read: “The letter to the FIA was in no way intended to undermine the legality of the race result.

“We received tens of thousands of queries relating to this matter from all over the world and it was incumbent on us to take the matter further, asking the Federation to look into an incident that could have cast a shadow over the championship in the eyes of all Formula 1 enthusiasts, not just Ferrari fans.

“Ferrari duly takes note of the reply sent by the FIA this morning and therefore considers the matter now closed.”

The controversy had cast doubt over the result of the world championship after Vettel sealed his third straight crown with a sixth-place finish at Interlagos.

The German won the title by three points from Ferrari’s Fernando Alonso, who finished second.

But if Vettel had been deemed to break the rules, he could have lost his crown to his Spanish rival, with a post-race 20-second penalty dropping him to eighth place.

The FIA confirmed on Friday that it had responded to Ferrari’s query. A spokesman said: “[We have] replied to Scuderia Ferrari stating that as the overtaking manoeuvre was not in breach of the regulations, and therefore there was no infringement to investigate, it was not reported to the Stewards by Race Control.”