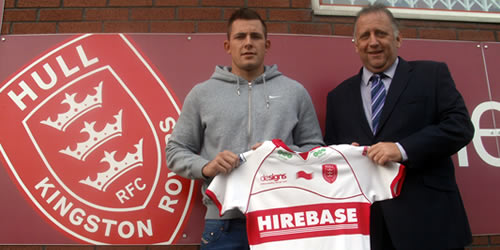 Eden, who has just turned 22, will link up with his new side immediately after signing a three-year contract.

“It was a pretty big decision for me to leave Huddersfield as I thought I was settled there for the next couple of years,” Eden said.

“Everything happened quickly though and now that it’s all been done I’m delighted to be a Hull KR player.

“To know that the club came along and really wanted me on board is a great feeling and I’m looking forward to repaying the faith that Craig [Sandercock] has shown in me.

“I learnt a lot at Huddersfield and hopefully I can carry that on and keep learning and progressing as a player under Craig.

“Obviously the aim is to cement a place in the side each week but I know there are a lot of good players at the club and that there’s plenty of competition for places within the squad.”

Elsewhere, London’s Craig Gower has signed a one-year contract extension to end his career in the capital.

The 34-year-old Australian half-back was already contacted until the conclusion of 2013, but says he and his family are comfortable at the club.

“We’re settled here, I spoke to the club and they were willing to give me another year which was great,” he said.

“Obviously last season was a tough season but we love being here and we’ve enjoyed it, even though it was a tough grind it’s just part of footy. I’m just looking forward to this year.”