India v England: Rahul Dravid urges the tourists to pick two front-line spinner for their four-Test series in the sub-continent 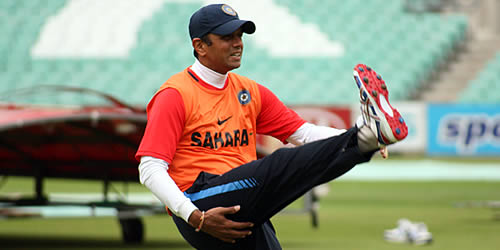 Rahul Dravid announced his decision to quit international cricket back in March Photo: The Sport Review

Rahul Dravid has urged England to play Monty Panesar to complement Graeme Swann ahead of the four-Test tour of India starting on Thursday.

England have several tricky selection decisions leading up to the Ahmedabad Test, including whether to pick Panesar or all-rounder Samit Patel to support regular twirler Swann.

Former India great Dravid feels that his old team-mates will be untroubled by Patel, who has a bowling average of just over 38 in first class cricket.

“Indians are extremely good players of spin and they are not going to get out to part-time bowlers,” Dravid told BBC Sport.

“Bits and pieces cricketers haven’t had much of an impact in India.

“Monty has bowled well in India in the past and can keep one end tight so I would like him to play.

“Personally I would definitely play the two frontline spinners.”

The Sussex spinner famously took the wicket of Sachin Tendulkar on debut six years ago in Nagpur the last time England played Test cricket in India.

Since then, Panesar has taken 142 wickets in 42 Tests across the world and is more than adequate support for Swann’s off spin.

But the crux lies with Patel’s superior batting ability, especially in sub-continental conditions, where he has been England’s best batsman facing spin over the last 12 months.

“I guess England have a problem because they don’t have that genuine all-rounder to bat at six like Andrew Flintoff, but if the tracks look
like they might turn then I would play both the specialist spinners,” added Dravid.

“It will be critical to see how many runs they can score and see if they can give Swann or Panesar a chance in that fourth innings to have a go at some of the young inexperienced Indian batsmen.”

‘Warren Gatland’s absence did not contribute to Wales loss’

England v Australia: Wallabies can do a lot of damage, warns Flood