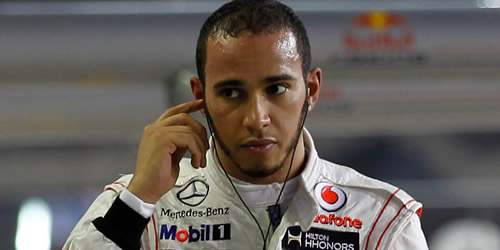 Lewis Hamilton admits it he found it “very tough” telling McLaren team principal Martin Whitmarsh that he would be leaving the team to join Mercedes next year.

Hamilton agreed a three-year deal with Mercedes in September following months of speculation over the 27-year-old’s future.

The Brit says his move was purely motivated by his desire for a “new challenge” but concedes that some McLaren team members did not see it coming.

“I wanted to do something different. I wanted a new challenge and have done for quite some time,” Hamilton told F1 Racing magazine.

“There were a lot of assumptions from people. I think Martin [Whitmarsh] assumed I would be staying, so when I made the call to him it was very tough and very emotional.

“Emotions were here, the mind thinking there. The heart was fighting the mind but I was in a comfortable place and just said: ‘Let’s do it.'”

Hamilton is preparing for the second-to-last race of the season at this weekend’s US Grand Prix in Austin, Texas – and he admits he is thrilled about returning to the States.

“I have to admit, I’m absolutely made-up that we’re going back to the States,” said Hamilton.

“It’s a fantastic country and a place where our sport truly deserves to be.

“I think the Circuit Of The Americas looks like it could also be the place modern Formula 1 finally calls home.

“I’ve only driven it on the computer and in the simulator, but I think it’s going to be a track that drivers enjoy, which produces some great, close racing, and which fans will quickly love.

“This is a new circuit, a new challenge and a new opportunity – I’m definitely looking to be the first grand prix winner at the Circuit Of The Americas.”

India v England: We shouldn’t be afraid to use spinners – Mike Gatting