Man City v Ajax: Frank de Boer insists the Eredivisie champions will look to attack against the English champions at the Etihad 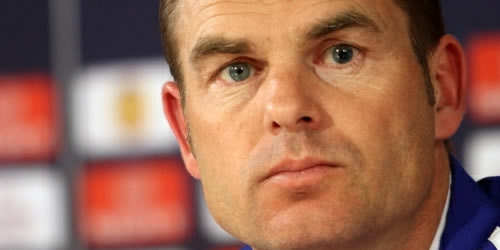 Frank de Boer has declared that Ajax will not ditch their attacking approach when the Dutch side face Manchester City at the Etihad Stadium on Tuesday.

De Boer’s men were convincing 3-1 winners against the Citizens in their last outing in the Champions League, with Siem De Jong, Niklas Moisander and Christian Eriksen all beating Joe Hart.

With the Eredivisie champions in third place in Group D, De Boer’s men require a victory to bolster their chances of reaching the last 16.

And the Ajax boss insisted his side will travel to the Eastlands outfit aiming to pick up maximum points to keep in touch with their rivals.

“All the teams in this group want to be playing Champions League football after the winter break,” said De Boer.

“But, of course, Manchester City want to get nine points from their remaining matches.

“We will try to get a result here. We are not going to throw it all open but it is not in our nature to play defensively. We want to show how we play at Ajax, whether we are at home or away.

He added: “I said before the game against Manchester City in Amsterdam that if we play our own game we can make it very difficult for anybody. We really have to believe.

“I want to see players that play bravely. Maybe it makes you a quality player if you play your best games under the highest pressure, and hopefully a lot of players will do that.”

• City are hosting Dutch opposition for the third time having twice got the better of Twente. They won 3-2 to secure a 4-3 aggregate success in the 1978-79 Uefa Cup first round, with Brian Kidd, now first-team coach, scoring the second goal.

• Ajax ended a 40-year wait for an away victory over English opponents when beating City’s neighbours United 2-1 in last season’s Europa League round of 32.

• Mario Balotelli’s late penalty equaliser against Dortmund on matchday two means City have still not lost a European home tie since a 1-0 reverse against Midtjylland in the 2008/09 Uefa Cup second qualifying round.

• Ajax’s overall record away to English sides is W2 D4 L4. Their only other success was a 1-0 victory at Arsenal in the 1971-72 European Champion Clubs’ Cup quarter-finals.