Paris Masters 2012: Gilles Simon is aiming for another Masters final, while David Ferrer is the highest seed left standing 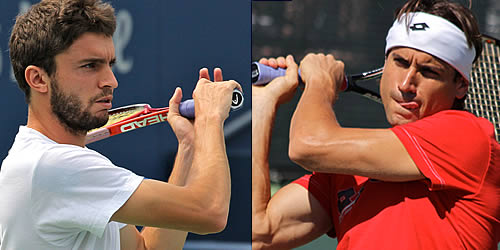 It’s an ill wind that blows nobody any good. The Paris Masters may have rued the loss of the ‘big four’ from its draw—Rafael Nadal and Roger Federer before the event began, Novak Djokovic and Andy Murray in the early rounds.

It may have cast its eyes skyward when London hopeful Richard Gasquet saw his chance evaporate in his first match, No15 seed Kei Nishikori pull out with injury, and in-form Juan Martin del Potro beaten in the third round.

But each of these downs brought openings, chances and thrills for others.

Murray’s exit was at the hands of a thrilling new name who has looked destined for good things since he turned professional: Jerzy Janowicz’s had finally come together, and it helped not a little that he was both exciting and likeable. His fairytale—and Paris’s love affair with the first Pole to reach a Masters quarter-final—was not over, either: He meted out the same treatment to another London qualifier, Janko Tipsarevic, to take an even bigger step for Poland.

Del Potro’s exit was just as much of a shock but just as much of a pleasure. Veteran Michael Llodra, always a home favourite for his extrovert personality and dynamic serve-and-volley game, was the second unseeded player into the quarters and would face another non-seed in giant-killing Sam Querrey. Llodra might have been the lowest ranked man left, at No121, but did not face a break point in his first three matches.

Querrey, who had wrist surgery 15 months ago, had already risen from 106 this April to No23 this week, and went from beating Djokovic to taking out Milos Raonic. If he beat Llodra, Querrey could even break the top 20 and reach his first Masters semi-final.

And the culling of the top four from the draw left an important door open for the next highest remaining seed, No5 David Ferrer.

At 30, the Spaniard who has spent most of his career in the shadow of compatriot Nadal, could cap possibly the best year of his career with not one but several special landmarks.

With Nadal out of competition since Wimbledon and not taking his place at the World Tour Finals, Ferrer could, by the end of the year, become the top-ranked Spaniard for the first time in his career.

What’s more, if he won his quarter-final against Jo-Wilfried Tsonga, he would equal the tour-leading total of match-wins held by Djokovic—70. And having drawn level with Federer’s season-leading six titles by winning in Valencia last week, Ferrer would head the tour should he win a seventh in Paris. More important to him, though, it would bring him a first Masters title having tasted defeat in three previous finals.

That he played the top French seed and former Paris champion Tsonga added extra drama to the closing days of the Parisian tournament.

Ferrer may have been the highest seeded man in Paris not to own a Masters title, but he was joined by five others looking for their first title at this elite level, too.

Tipsarevic had never even reached a Masters final, and nor had Querrey, Llodra and Janowicz. The sixth man, Gilles Simon, had reached one Masters final in his career, in Madrid in 2008—and now his chances of doing so again looked better with each passing day.

He, of all the men in Paris, had perhaps seen the silver lining of the cloud-strewn draw more than most. Things looked bleak when he was drawn to play Federer in the second round, but he beat replacement Victor Hanescu with no trouble.

Then Simon received a walkover into the quarters when Nishikori withdrew. And if his luck seemed then to have run out when he faced No5 seed Tomas Berdych, that belied a surprising back-story.

The Czech’s only Masters title—just like Tsonga’s—had come in Paris back in 2005. Since then, he had played Simon in six matches and had lost four of them. Their most recent meetings, in 2009, came on the hard courts of Shanghai and Valencia—and both went to the Frenchman. This was, in short, the kind of match-up where the paper has to be thrown out the window.

Simon, despite a lack of outright power, a big serve or forehand, or even exceptional variety, has endurance, nimbleness and very smart, very relentless tactics. He can both absorb the flat power of Berdych and outmanoeuvre him around the court with hard-to-read changes of direction.

Since their last meeting, however, Berdych had risen from a ranking of 20 to No6, so when Berdych went down an early break, it was not too much of a concern. Then the Frenchman had to fend off 13 minutes of attack to keep his advantage in the eighth game, but he came back to force Berdych through a similar ordeal and almost broke the Czech to take the set.

With an hour on the clock, Simon went on to serve out the set, and did so to love, countering a drop shot with a delicate cross-court drop of his own: 6-4.

Now the Czech’s power began to kick in and he eliminated many of the errors that littered the first set. He seemed, at last, to get a better read on the Simon game and took a 3-0 lead. This looked as though it would be a repeat of his comeback from a 1-6 first set against Kevin Anderson the day before.

But Simon began to place his serves better and hit his deceptive double-handed backhand down the line with more effect. His constant change of direction from the baseline, married with outstanding defence, caught out the Czech over and over until Simon put his own run of three games together and they stood at 4-4.

Not content with that, the Frenchman went 40-15 up on the Berdych serve, drew the error with one of many sliced forehands reminiscent of squash rather than tennis, and broke. Simon served out the match, 6-4, to reach the Paris semis for the first time. He had not even reached the Paris quarters before, and the crowd was ecstatic.

So it is, indeed, an ill wind that blows nobody any good. The French fans may have only two seeds of the 16 remaining, and those two will be down to one by the time Ferrer and Tsonga have decided the last semi-final place.

But what the home fans could never have expected was to see three Frenchmen in the quarters of a Masters tournament—and on home soil at that—for the first time since this elite tier was created in 1990.