Paris Masters 2012: Jo-Wilfried Tsonga secures a place in the quarter-finals and books place at the ATP World Tour Finals 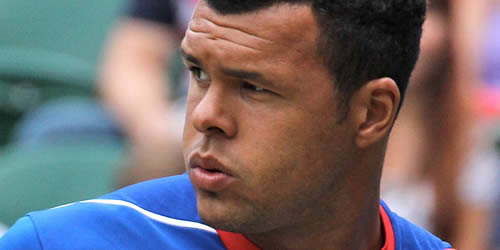 There were always questions about how the final Masters of the year in Paris Bercy would cope with its new slot straddling October and November, squeezed tightly between two key weeks in the tour.

Sure enough, a ghostly pallor hung over its start when first came confirmation of Rafael Nadal’s absence and then the last-minute withdrawal of top seed Roger Federer.

Worse was to come. The inspiring late form of Richard Gasquet, hoping to play his way to the World Tour Finals for the first time in five years, was snuffed out by Kevin Anderson.

Next came injuries: Spaniard Fernando Verdasco retired with a neck problem and the Japanese No15 seed Kei Nishikori pulled out against Gilles Simon with an ankle injury.

The nightmare got worse. With appropriate timing, on Halloween itself, top seed and year-end No1 Novak Djokovic entered the spirit of the occasion in a Darth Vader mask but he left sans mask, sans win and sans a chance of his sixth title of the year and his fourth Masters title.

Despite holding the most wins this season in Masters events—a 34-5 win-loss—and a 70-11 overall win-to-loss record this season, Djokovic failed to convert any of his five break point chances in the deciding set to hand Sam Querrey, who has enjoyed a resurgence of form to lift him 70 ranking places since April, a startling win.

With Halloween now giving way to November, the bad news for Paris kept coming. A week that had started with hopes of a highly-anticipated repeat of the Djokovic and Andy Murray Shanghai Masters showdown ended with not just one missing protagonist but both, as Murray fell at his second hurdle.

The US Open champion had match point in the second set against the fast-rising Pole, Jerzy Janowicz, after a first set of outstanding tennis from both men, and as the only member of the ‘big four’ left in the draw, Murray looked on course to advance beyond the quarters in Paris for the first time.

But Janowicz is a young player beginning to fulfil the remarkable potential he showed, by chance, against Murray in a Davis Cup tie three years ago. Back then, despite losing, this correspondent noted:
“It was his physical presence that impressed first. Janowicz was variously described in the Press as somewhere between 6ft6in and 6ft8in: He is, in truth, mid-way between the two…He certainly had his large frame under impressive control around the court, and showed a willingness to power from behind the baseline and to advance to the net position.

“He made a lot of volley errors against Murray, but that seemed due more to over-enthusiasm than to poor movement. What he lacked in consistency he made up for in aggression and ambition.”

Now 21, the Pole has risen to 69 from 240 in February, and in Paris had already beaten two top-20 players in Philipp Kohlschreiber and Marin Cilic without facing a break point.

He withstood match point, at 5-7, 4-5 down, and took control of the tie-break to level the match. He went on the attack in the third to break twice, winning the match, 6-2, to reach his first Masters quarter-final.

Janowicz is developing one of the biggest serves in the game—he scored 22 aces against Murray—and later the same day, two more of the tour’s big servers went head-to-head, this time in the bottom quarter. It was again the big American Querrey who, not content with taking out Djokovic, did the same to No14 seed Milos Raonic in straight sets.

With the biggest server of aces on the tour, John Isner, already beaten in this same Djokovic quarter, the field was opening up nicely for No7 seed, Juan Martin del Potro. He had come to Paris with back-to-back titles in Vienna and Basel and sailed through his first opponent, Alejandro Falla, for the loss of just four games.

The Argentine next faced crowd favourite and wild card Michael Llodra—aged 32 and ranked 121. The entertaining French left-hander was playing in Bercy for the eighth time and had his best result two years ago to reach the semi-finals. He came into Paris this year having not won a match since reaching the French Open second round in May, but on his best playing surface and inspired by his home crowd, he produced serve-and-volley magic to beat del Potro 6-4, 6-3 in 69 minutes.

His attacking, fearless style of tennis, when it works, is both exciting and destructive: He notched up 24 winners to del Potro’s 17, taking 26 points out of 36 net approaches.

The bottom quarter will therefore bring together two unseeded men in Llodra and Querrey to play for the chance of a semi against a much stronger upper quarter. There, the top remaining seed, David Ferrer, fresh off a sixth 2012 title in Valencia, locked horns with No16 seed Stan Wawrinka while the No6 seed, Jo-Wilfried Tsonga, still anxiously seeking London qualification, played No11 seed Nicloas Almagro, who had to win here and advance to the final to guarantee his London place.

The latter match was as intense as the stakes demanded and here, at last, there was a ray of late autumn sunshine.

With Frenchman Simon and Llodra already in the quarters of their home tournament, Tsonga resisted two break points in the first set to come through the winner of an opening tie-breaker, and then faced off one more in a second set that was just as closely fought. By the second tie-breaker, the crowd could barely contain their excitement as the top-ranked Frenchman—champion here in 2008 and runner-up last year—found all his flair, especially around the net, to take the win.

With it came his guarantee of a place in London and, in the wings, also guaranteed the No8 spot to Janko Tipsarevic, who earlier beat another London hopeful, Juan Monaco. The Argentine was looking for his first ever place at the World Tour Finals and had a break point in the third set, but Tipsarevic proved the stronger to take a 6-3, 3-6, 6-3 win.

There is still a reserve spot up for grabs, and the No9 position has become almost as intriguing as the race itself. In ninth, Gasquet and Almagro are tied for points and with only one other contender still in competition in Paris.

That man is Wawrinka and he would have to win this tournament to take berth No9. All he had to do was beat Ferrer, then Tsonga, and probably the new favourite for this year’s Paris title, 2005 champion, Tomas Berdych. So perhaps there will be room a second Frenchman in London after all.