Sebastian Vettel: We still have the momentum in title race 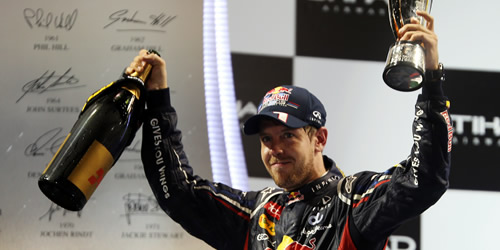 Sebastian Vettel believes Red Bull still have the momentum going into the final two races of the season as the German eyes a third straight world title.

The result leaves the Red Bull driver 10 points ahead of Ferrari’s Fernando Alonso heading into the US Grand Prix later this month.

“Obviously, we see how quickly things can change,” said Vettel. “Yesterday was a surprise for us and [had] we started from third, it would have been a different race.

“We lost only a very little bit, I think we have the momentum still, the car is bloody quick, so we’re looking forward to the next two races. We are definitely believing in [the title] and that’s the target.”

Vettel now has the chance to wrap up his third consecutive drivers’ crown in Austin, Texas in what will be his 100th grand prix.

“Now, when I’m talking about 2006, 2007, when I started to drive an F1 car for the first time, I still know most of the guys and can recall the places I’ve been. If you then tell me it’s six years ago, it sounds like a big number.

“Time goes by and, obviously, with age, you get a little bit smarter – hopefully. You learn certain things and you get a little more relaxed probably, but also it’s important to stay childish, stay hungry and make mistakes, otherwise how can you go forward?

“All in all, I’m looking forward to going home, get some rest, charge some energy to be full charged in America to attack – and obviously try to win.”

Ferrari’s Fernando Alonso: There’s nothing we can do in title race